Articoli correlati a Imaginary Speeches: A Selection of Declamations

Imaginary Speeches: A Selection of Declamations 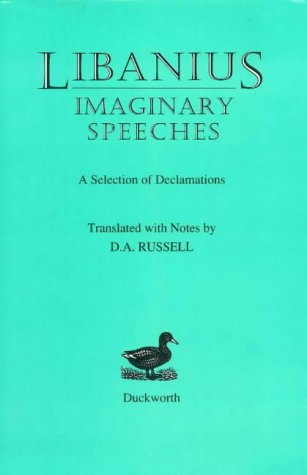 Libanius of Antioch (314-393) was a famous teacher whose influence persisted in the Byzantine world and into Renaissance times. Many of his works, including speeches, an autobiography and over 1500 letters have survived. His "imaginary speeches" were written as rhetorical exercises, partly as models for students, but also for the entertainment of an interested public. They take the form of witty dramatic monologues, mostly evoking the world of classical Athens as known from comedy, the Socratic writings and oratory. The selection translated here includes the weighty "Apology of Socrates", but concentrates on the lighter pieces - spoken by misers, misanthropes and other strongly drawn characters - which are among the most successful humorous works in Greek literature. In his introduction Russell deals with Libanius' life and works, the nature of declamation and the rhetorical principles illustrated by the speeches. Notes to each piece explain allusions and analyze structure.

1. Imaginary Speeches: a Selection of Declamations

4. Imaginary Speeches: a Selection of Declamations

Descrizione libro Duckworth Publishing, 1996. Hardcover. Condizione: Good. A+ Customer service! Satisfaction Guaranteed! Book is in Used-Good condition. Pages and cover are clean and intact. Used items may not include supplementary materials such as CDs or access codes. May show signs of minor shelf wear and contain limited notes and highlighting. Codice articolo 0715627155-2-4