Articoli correlati a Revolution and Empire: English Politics and the American...

Bliss, Robert M. Revolution and Empire: English Politics and the American Colonies in the Seventeenth Century

Revolution and Empire: English Politics and the American Colonies in the Seventeenth Century 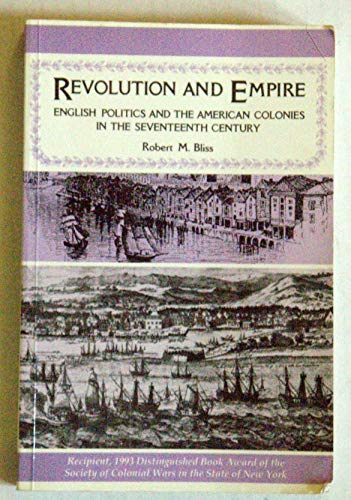 In England in the 17th century - the Puritan upheaval of the 1640s and 1650s and the Glorious Revolution of 1688. These crises did much to shape the empire and the colonies, often by provoking colonial reaction, but also indirectly by bringing forth new ideas about government. The colonies' existence was a testament to accumulated capital and population and to a widespread desire to employ both for high and mundane ends. The growth of population and production, the rise of new and the decline of old trades were important features of 17th-century American and English history. This study covers the North American and West Indian colonies as well as England. Research on American sources has concentrated on the main settlements of Massachusetts, Virginia, Barbados and Jamaica, their public records, printed and manuscript correspondence and local and county records. References to lesser colonies such as New York, Carolina and the fringe settlements of New England occur because these smaller settlements have their own stories to tell about the processes of adjustment. Research on England has emphasized sources used by imperial and colonial historians, but attention has also been paid to the political writings and the "non-colonial" activities of governments and politicians, among the latter concentrating on the Restoration figures of Clarendon, Shaftesbury and Danby. The limitations of this study are discussed in the first chapter which also serves as an introduction to the study and sketches the historical background to 1625. This volume aims to consider both England and the main American settlements, different places where similar developments often occurred at different paces. Some of the chapters alternate between English and American emphases, whilst some are transatlantic in scope.