Articoli correlati a Politics and Paintings at the Venice Biennale 1948-64:...

Jachec, Nancy Politics and Paintings at the Venice Biennale 1948-64: Italy and the Idea of Europe

Politics and Paintings at the Venice Biennale 1948-64: Italy and the Idea of Europe 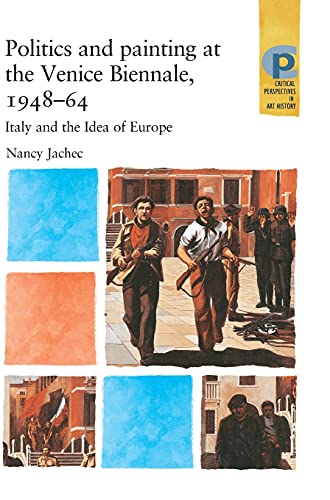 Although cultural exchanges were named within the Council of Europe in the mid- 1950s as being second only in importance to the military as a tool for ensuring a stable and integrated Western Europe in the aftermath of the Second World War, European-led initiatives have generally been overlooked in the historiography of art of the immediate post-war period. Popularly remembered as the era of the United States' cultural 'triumph', American Abstract Expressionism in particular is commonly identified as the cultural 'weapon' by which that nation conquered Western European culture.

Using the Venice Biennale as a case study, this book challenges the idea that there was an American cultural conquest in the 1950s through the fine arts, arguing instead that Western Europe retained a strong sense of world cultural leadership in the immediate post-war years. An institutional history that combines political and diplomatic with art history, and is informed by extensive archival research, it argues that Italian political and cultural figures actively promoted the 'Idea of Europe' - the Council of Europe's cultural initiative of 1955 designed to promote the idea of a homogeneous post-war European culture - at the Biennale in the form of gesture painting as an international style, as the emblem of a culturally united Western Europe, and as the repository of universal humanist values for the international community.

Scholarly but accessible, this book will be of interest not only to researchers and to students of international cultural relations during the Cold War, but to general, interested readers, too.

Nancy Jachec is an independent scholar and currently holds a part-time research fellowship at the History of Art Department, Oxford Brookes University

1. Politics and Paintings at the Venice Biennale 1948-64: Italy and the 'Idea of Europe' (Critical Perspectives in Art History)