Articoli correlati a Sea of Poppies 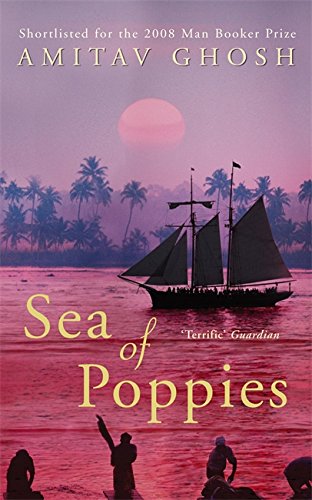 At the heart of this epic saga, set just before the Opium Wars, is an old slaving-ship, The Ibis. Its destiny is a tumultuous voyage across the Indian Ocean, its crew a motley array of sailors and stowaways, coolies and convicts. In a time of colonial upheaval, fate has thrown together a truly diverse cast of Indians and Westerners, from a bankrupt Raja to a widowed villager, from an evangelical English opium trader to a mulatto American freedman. As their old family ties are washed away they, like their historical counterparts, come to view themselves as jahaj-bhais or ship-brothers. An unlikely dynasty is born, which will span continents, races and generations. The vast sweep of this historical adventure spans the lush poppy fields of the Ganges, the rolling high seas, and the exotic backstreets of China. But it is the panorama of characters, whose diaspora encapsulates the vexed colonial history of the East itself, which makes Sea of Poppies so breathtakingly alive - a masterpiece from one of the world's finest novelists.

A stunningly vibrant novel from Amitav Ghosh, author of the internationally acclaimed bestseller THE GLASS PALACE

Amitav Ghosh was born in Calcutta in 1956. He grew up in Bangladesh, Sri Lanka and India. He studied at the universities of Delhi and Oxford and published the first of six novels, The Circle of Reason in 1986. He has taught at a number of institutions, most recently Harvard, and written for many publications. He currently divides his time between Calcutta, Goa and Brooklyn, and is writing the next volume of what will become The Ibis Trilogy.

Descrizione libro John Murray, 2009. Paperback. Condizione: Good. Connecting readers with great books since 1972. Used books may not include companion materials, some shelf wear, may contain highlighting/notes, may not include cdrom or access codes. Customer service is our top priority!. Codice articolo S_256247441

Descrizione libro John Murray, 2009. Paperback. Condizione: Good. Connecting readers with great books since 1972. Used books may not include companion materials, some shelf wear, may contain highlighting/notes, may not include cdrom or access codes. Customer service is our top priority!. Codice articolo S_285007353

Descrizione libro John Murray, 2009. Paperback. Condizione: Very Good. The book has been read, but is in excellent condition. Pages are intact and not marred by notes or highlighting. The spine remains undamaged. Codice articolo CIN000387750

Descrizione libro John Murray, 2009. Paperback. Condizione: Used; Good. **SHIPPED FROM UK** We believe you will be completely satisfied with our quick and reliable service. All orders are dispatched as swiftly as possible! Buy with confidence!. Codice articolo mon0002154539

Descrizione libro John Murray 19/03/2009, 2009. Paperback. Condizione: Very Good. Shipped within 24 hours from our UK warehouse. Clean, undamaged book with no damage to pages and minimal wear to the cover. Spine still tight, in very good condition. Remember if you are not happy, you are covered by our 100% money back guarantee. Codice articolo 6545-9780719523434