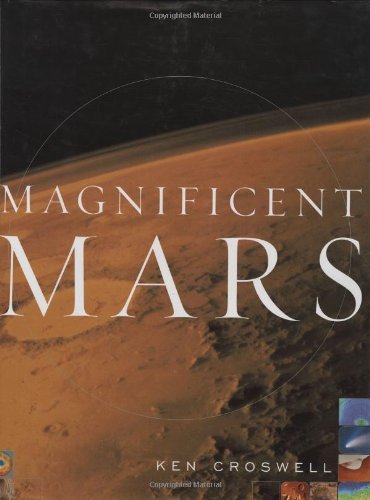 Mars has long offered the prospect of another living world near Earth. Although NASA's first spacecraft dashed visions of little green men tending canals, recent voyages have painted a picture of an intriguing planet that may have once resembled Earth, with warmth, water, and possibly life. Mars may answer the great question "Are we alone?"; for if Mars, like Earth, gave rise to life, then trillions of other worlds throughout the universe have surely done the same.

Harvard-trained astronomer Ken Croswell set the standard for elegance and eloquence with his stunning photographic triumph, Magnificent Universe. Now, with insightful prose and astonishing images, he presents the red planet's full glory in Magnificent Mars, showing volcanoes taller than Mount Everest, spiral-shaped polar caps of ice, and a canyon system that could stretch from Ohio to California. Here is a concise synthesis of the latest research on Mars, accompanied with the very best full-color images, expertly reprocessed to look even better than NASA's own versions, from the Hubble Space Telescope, Viking, Pathfinder, Mars Global Surveyor, Mars Odyssey, and other spacecraft. Highlights include a foldout panorama of the Martian surface; a never-before-published, rainbow-colored topographic map; and a sequence showing a full rotation of Mars, courtesy of the Hubble Space Telescope. Many of these images have never appeared in a book before. Few have ever looked so good.

In lyrical prose, Dr. Croswell weaves these stupendous images into a virtual tour of Mars by organizing them around the four elements -- Earth, Air, Fire, and Water. From the northern plains of Vastitas Borealis to the towering Olympus Mons and other volcanoes of the Tharsis bulge, we explore the red planet's geology, topography, and surface. From the frigid climate to the massive dust storms that can engulf the entire globe, we examine the thin Martian atmosphere and the clues it preserves to the planet's wetter past. And, from the flood channels that spill into Chryse Planitia to the vast potential lakebed of ancient Hellas, we see stunning images of ancient rivers and floods, triggering speculation that a warm, wet Mars may have given rise to life that survives to this day. The tour concludes with a voyage to the planet's two potato-shaped moons, Phobos and Deimos, complete with rainbow-colored topographic maps. Unique color-coded tables on Mars, its atmosphere, its life history, its moons, and NASA missions to the planets appear in a useful reference section, along with a glossary and suggestions for further reading.

"With its large format, superb images, and compelling text, Magnificent Mars is the next best thing to standing on the red planet itself." SPACE.COM

Ken Croswell is an astronomer in Berkeley, California. He is the author of ALCHEMY OF THE HEAVENS and PLANET QUEST.