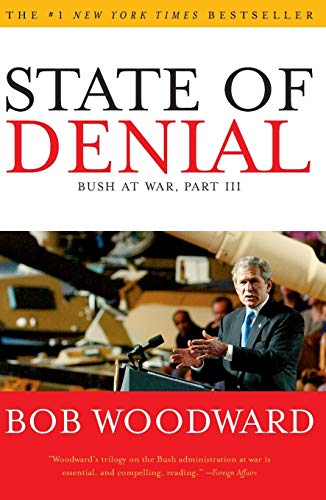 The author of Bush At War presents an intimate account of the present state of national security decision-making, placing Bush's presidency in a historical context that discusses how his team at the White House, the Pentagon, CIA, and State Department have attempted to transform warfare; overcome security, intelligence, and policy failures; and change the strategy of Iraq's occupation. Reprint. 100,000 first printing.

"State of Denial feels all the more outraged for its measured, nonpartisan tones and relentless reporting. It is nothing less than a watershed.... The full story of the Iraq War will be told by historians....This book...will be at the top of their shelves as they proceed to the altar of judgment."

"Serious, densely, even exhaustively reported, and a real contribution to history in that it gives history what it most requires, first-person testimony....This is a primer on how the executive branch of the United States works, or rather doesn't work, in the early years of the 21st century."

"Never-before-reported nuggets in every chapter....It offers the most revealing in-the-room glimpse of the Bush administration that we have so far."

"State of Denial is brimming with vivid details about White House meetings, critical phone calls, intelligence reports, and military affairs....Impressively detailed and eye-opening revelations about the Bush administration's handling of the Iraq war and its aftermath."

"Woodward's book is packed with details about the gulf between the information the administration had and the picture it presented."

"Woodward's trilogy on the Bush administration at war is essential, and compelling, reading."

Bob Woodward is Assistant Managing Editor at the WASHINGTON POST. His Pulitzer Prize-winning Watergate reporting is said to have set the standard for modern investigative reporting. He is the author or co-author of over a dozen internationally bestselling books.