Articoli correlati a Getting Away With Genocide?: Elusive Justice and the...

Fawthrop, Tom; Jarvis, Helen Getting Away With Genocide?: Elusive Justice and the Khmer Rouge Tribunal

Getting Away With Genocide?: Elusive Justice and the Khmer Rouge Tribunal 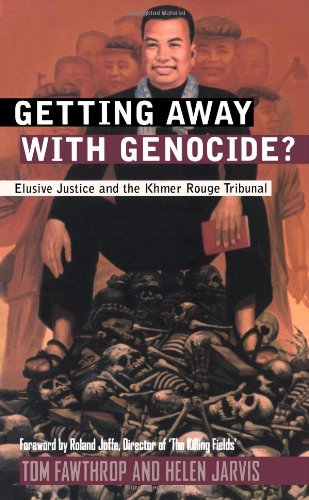 Looks at the history of trying to bring the Khmer Rouge to justice in Cambodia.

This book will be essential reading for academics, diplomats, journalists, Cambodia specialists and others who follow the Khmer Rouge trial closely. It will also be of special interest to those who follow other international criminal proceedings concerned with genocide and crimes against humanity. Arguments over the Cambodian model for a 'mixed' tribunal (domestic in form but international in character) will continue for years to come. This book explains how this unique model was created and why. The diplomatic, legal and technical twists and turns detailed here are fascinating, instructive and, at times, alarming. For years to come - as the Khmer Rouge trial unfolds or collapses - scholars and commentators are going to find much in this book to inform their analysis of what happened and why. (Bill Herod, head of a social service agency in Phnom Penh and a development worker in Cambodia for over thirty years)

This book is an insider's account of the twenty-five year struggle to bring the Khmer Rouge to justice. Until 1991, the morally bankrupt real-politik of the West not only supported seating the Khmer Rouge in the United Nations, but opposed trying them for their crimes. Over a decade later, a Cambodian - United Nations tribunal is about to convene, if Western governments will donate the money to support it. After this past decade's trillion dollar wars, is sixty million dollars too much to ask to try the remaining leaders of a regime that murdered two million of its own people? This book could not be more timely. (Dr. Gregory H. Stanton, Founder of The Cambodian Genocide Project and President of Genocide Watch)

Tom Fawthrop is a British journalist who has covered South East Asia, including Cambodia, for major newspapers and journals since 1979. His reports have appeared in the Economist,the Guardian, the London Sunday Times and he has contributed to BBC radio and TV. He produced and directed the TV documentary 'Dreams & Nightmares' shown on Channel 4 in 1989.

1. Getting Away With Genocide: Cambodia&#39;s Long Struggle Against the Khmer Rouge

2. Getting Away With Genocide: Cambodia's Long Struggle Against the Khmer Rouge