Articoli correlati a Harry Potter and the Deathly Hallows (barn): 7/7 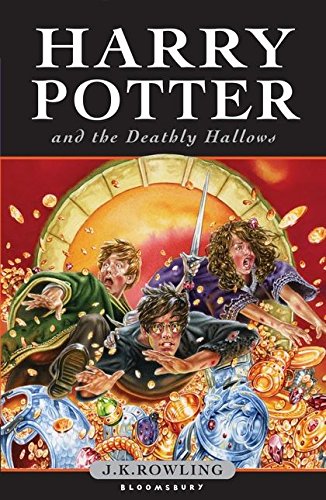 Harry Potter is preparing to leave the Dursleys and Privet Drive for the last time. But the future that awaits him is full of danger, not only for him, but for anyone close to him - and Harry has already lost so much. Only by destroying Voldemort's remaining Horcruxes can Harry free himself and overcome the Dark Lord's forces of evil. In this dramatic conclusion to "The Harry Potter Series", Harry must leave his most loyal friends behind, and in a final perilous journey find the strength and the will to face his terrifying destiny: a deadly confrontation that is his alone to fight. In this thrilling climax to the phenomenally bestselling series, J.K. Rowling reveals all to her eagerly waiting readers.

The 7th and final book of the record breaking series, now available in paperback. It was the fastest selling book of all time in its hardback edition, with over 2.5 million sold on the first day of release. Ages: 9-11yrs. An adult edition is also available.

Descrizione libro Soft cover. Condizione: New. No Jacket. 1st Edition. Paperback. Brand New. London, U.K. Book Condition: New. Dust Jacket Condition: None. Numbered Line: 10-1.Corners sharp. 607 pp. First Edition, First Impression. Without Dedication. Unread Condition. Can send more images. We aim to provide you with an excellent service throughout; Fast delivery guaranteed; Shipped promptly from our UK Warehouse. In Stock. IN EXCELLENT CONDITION. PLEASE CONTACT US BEFORE ORDERING. Shipping is normally same day from the UK. "UK BASED SELLER ALL OVERSEAS SHIPPING VIA AIRMAIL". We offer a money back guarantee if you are not fully satisfied, please contact us if you have any questions. Bookseller Inventory #O. 20201003_153604. F. Codice articolo 006012

HARRY POTTER AND THE DEATHLY HAL