Articoli correlati a Managing in the Next Society

Drucker, Peter F. Managing in the Next Society

Managing in the Next Society 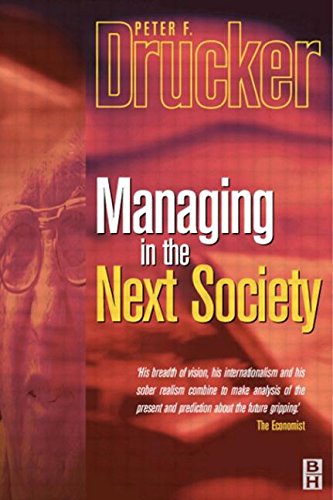 "To be able to exploit these changes as opportunities for the enterprise ... executives will have to understand the realities of the Next Society and will have to base their policies and strategies on them. To help them do this, to help them successfully manage in the Next Society, is the purpose of this book." - Peter F. Drucker

Managing in the Next Society is a collection of Peter Drucker's most strikingly prescient articles from the past five years. Salient and incisive as ever, Drucker ranges widely over the most critical issues facing business and society today to offer advice, admonition and instruction for proactive executives.

Divided into four parts, the book offers seaching analysis of the 'information revolution' and the knowledge society it has created. It goes on to scrutinize the unprecedented demographic, economic and sociological transformations of recent times to present an outline of "the Next Society" - which in turn points to a challenging, provocative and at times shocking view of the future.

The rapid shrinkage of young people in the developed world for instance looks set to create a fundamental rift in the composition and scope of the mass market. With the work force being dominated by knowledge technologists, traditional personnel policies and personnel management are quickly becoming obsolescent. So what will take their place? And how will enterprises manage a work force which increasingly consists of people who work for the enterprise without being employees of the enterprise? While rapidly expanding in production volume, manufacturing is rapidly shrinking as a creator of wealth and jobs-to the point of becoming marginal socially but paradoxically thereby becoming all the more potent politically. And globalization means the rapid emergence worldwide of a new and dominant middle class. What does all this mean for managements and businesses?

Drucker's work has taken a leading place in some of the most celebrated publications in the world, including the Economist, Harvard Business Review and the Wall Street Journal. This book provides the opportunity to sample the very best of Drucker's new writing in one volume. It is absolutely essential reading for any one who wants to know how today's tranformations will affect tomorrow's economic climate.

The best new writing from the world-renowned management guru - all in one volume
Find out his views on the issues that will revolutionize tomorrow's commercial environment - such as the competitive knowledge society
Take advice on how to understand, adapt to and benefit from these transformations

'A prolific author, he is renowned for his prophetic books analysing politics, economics and society. MANAGING IN THE NEXT SOCIETY analyses the information revolution and the knowledge society. It scrutinses the demographic, economic and sociological transformation of recent times to present an outline of the 'Next Society': a provocative, challenging and at times disturbing view of the future.'

Born in Vienna in 1909, Peter F. Drucker was educated in Austria and England. From 1929 he was a newspaper correspondent abroad and an economist for an international bank in London. Since 1937 he has been in the United States, first as an economist for a group of British banks and insurance companies, and later as a management consultant to several of the country's largest companies, as well as leading companies abroad. Drucker has since had a distinguished career as a teacher, first as Professor of Politics and Philosophy at Bennington College, then for more than twenty years as Professor of Management at the Graduate Business School of New York University. Since 1971 he has been Clarke Professor of Social Science at Claremont Graduate School in California. In addition to his management books, Peter Drucker is also renowned for his prophetic books analysing politics, economics and society. These books span fifty years of modern history beginning with The End of Economic Man (1939) and including The Practice of Management; Innovation and Entrepreneurship; Managing in the Next Society; Management Challenges in the 21st Century; The Effective Executive and The Essential Drucker.

1. Managing In The Next Society

2. Managing in the Next Society

3. Managing in the Next Society Drucker, Peter F.