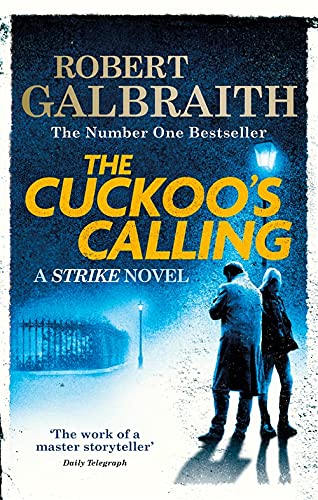 When a troubled model falls to her death from a snow-covered Mayfair balcony, it is assumed that she has committed suicide. However, her brother has his doubts, and calls in private investigator Cormoran Strike to look into the case.

Strike is a war veteran - wounded both physically and psychologically - and his life is in disarray. The case gives him a financial lifeline, but it comes at a personal cost: the more he delves into the young model's complex world, the darker things get - and the closer he gets to terrible danger . . .

A gripping, elegant mystery steeped in the atmosphere of London - from the hushed streets of Mayfair to the backstreet pubs of the East End to the bustle of Soho - The Cuckoo's Calling is a remarkable book. Introducing Cormoran Strike, this is the acclaimed first crime novel by J.K. Rowling, writing under the pseudonym Robert Galbraith.

*** The latest book in the thrilling Strike series, LETHAL WHITE is out now! ***

PRAISE FOR THE STRIKE SERIES:

'The work of a master storyteller' DAILY TELEGRAPH

'Will keep you up all night' OBSERVER

Everytime I put this book down, I looked forward to reading more. Galbraith writes at a gentle pace, the pages rich with description and with characters that leap out of them. I loved it. He is a major new talent (Peter James)

Just once in a while a private detective emerges who captures the public imagination in a flash. And here is one who might well do that . . . There is no sign that this is Galbraith's first novel, only that he has a delightful touch for evoking London and capturing a new hero. An auspicious debut (Daily Mail)

In a rare feat, Galbraith combines a complex and compelling sleuth and an equally well-formed and unlikely assistant with a baffling crime in his stellar debut . . . Readers will hope to see a lot more of this memorable sleuthing team (Publishers Weekly, starred review)

Laden with plenty of twists and distractions, this debut ensures that readers will be puzzled and totally engrossed for quite a spell (Library Journal)

A scintillating debut novel . . . Galbraith delivers sparkling dialogue and a convincing portrayal of the emptiness of wealth and glamour (The Times, Saturday Review)

Utterly compelling . . . a team made in heaven and I can't wait for the next in the series (Saga Magazine)

The detective and his temp-agency assistant are both full and original characters and their debut case is a good, solid mystery (Morning Star)

Now a major BBC Drama, The Cuckoo's Calling is the acclaimed first crime novel by J.K. Rowling, writing under the pseudonym Robert Galbraith.

Descrizione libro 2014. Paperback. Condizione: New. Paperback. 'THE CUCKOO'S CALLING reminds me why I fell in love with crime fiction in the first place' VAL MCDERMID -----Now a major BBC drama: THE STRIKE series When a troubled model falls to her dea.Shipping may be from multiple locations in the US or from the UK, depending on stock availability. 560 pages. 0.540. Codice articolo 9780751549256