Articoli correlati a The Poet 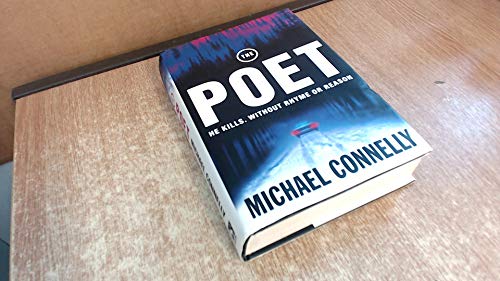 The apparent suicide of his policeman brother sets Denver crime reporter Jack McEvoy on edge. Surprise at the circumstances of his brother's death prompts Jack to look into a whole series of police suicides and puts him on the trail of a cop-killer whose victims are selected all too carefully. Not only that, but they all leave suicide notes drawn from the poems of writer Edgar Allan Poe in their wake.

More frightening still, the killer appears to know that Jack is getting nearer and nearer. An investigation that looks like the story of a lifetime might also be Jack's ticket to a lonely end.

A suspense novel by a master of the genre. Once you're 50 pages in, I defy you to put it down (Stephen King)

Connelly is a crime writing genius (INDEPENDENT ON SUNDAY)

His methods of killing and eluding detection are infernally ingenious, adding an intellectual charge to the visceral kick of the hunt (NEW YORK TIMES)

While the themes of Connelly's LA crime novels are familiar (power, envy, corruption), his plotting is anything but (ESQUIRE)

No one writes a better modern thriller than Connelly (TIME OUT)

A cunning, poetry-quoting serial killer of unprecedented savagery executes one homicide cop after another . . . An unputdownable thriller from the award-winning No. 1 bestselling author

Descrizione libro Orion Books Ltd, 1996. Hardback. Condizione: Very Good. The book has been read, but is in excellent condition. Pages are intact and not marred by notes or highlighting. The spine remains undamaged. Codice articolo GOR002818368

Descrizione libro Orion Books Ltd, 1996. Hardback. Condizione: Fair. A readable copy of the book which may include some defects such as highlighting and notes. Cover and pages may be creased and show discolouration. Codice articolo GOR002934076

Descrizione libro Orion, 1996. Hardcover. Condizione: Used; Good. **Simply Brit** Shipped with Premium postal service within 24 hours from the UK with impressive delivery time. We have dispatched from our book depository; items of good condition to over ten million satisfied customers worldwide. We are committed to providing you with reliable and efficient service at all times. Codice articolo 1114940

Descrizione libro Orion, 1996. Hardcover. Condizione: Good. A slight tan to the page edges. Ex Library Book with usual stamps and stickers. Slight rubbing to slipcase/sleeve. Good condition is defined as: a copy that has been read but remains in clean condition. All of the pages are intact and the cover is intact and the spine may show signs of wear. The book may have minor markings which are not specifically mentioned. Most items will be dispatched the same or the next working day. Codice articolo mon0016775140