Articoli correlati a These Twain: 3 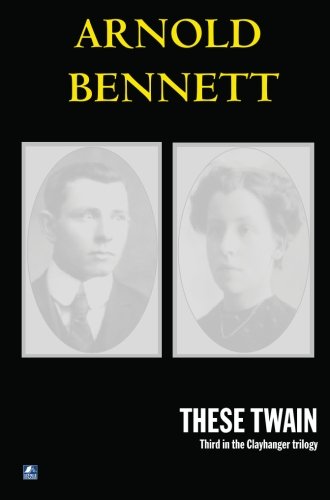 In ‘Clayhanger’ and ‘Hilda Lessways’, Bennett followed the development of a relationship from two very different perspectives. He now draws these together in a finale that sees the two young protagonists embarking upon married life. One might expect a fairy tale romance, but both Edwin and Hilda are extremely strong-willed, and this clash of personalities makes for a marriage that often hovers on the brink of failure. This concluding volume of the ‘Clayhanger trilogy’ contains some of Bennett’s very finest work, depicting superb scenes from provincial life and painting a powerful picture of the conflict of wills in an inharmonious marriage.

Enoch Arnold Bennett, the son of a solicitor, was born in Hanley, which is in the Potteries district of Staffordshire. He was initially employed by his father, a solicitor, and at age twenty-one moved to London, initially to again work as a solicitor’s clerk. However, he soon turned to writing popular serial fiction and editing a women’s magazine. After publication of many articles and stories in serial form, his first novel A Man From the North was published in 1898. This novel was received with critical acclaim and Bennett became a full-time professional writer and moved to Paris where he became a man of cosmopolitan and discerning tastes. During the First World War, Arnold Bennett became director of propaganda for France at the Ministry of Information at the behest of Lord Beaverbrook, whose experiences during the First World War were to later inspire Bennett to write the novel Lord Raingo. At the end of the war, he was offered a knighthood, but refused it.