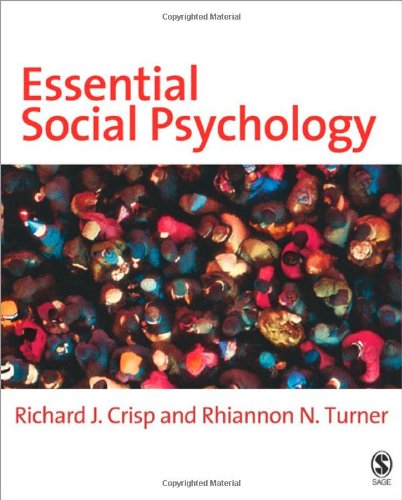 Essential Social Psychology introduces students to the core theories, approaches, and findings that are the necessary foundations for developing an understanding of social psychology. The text focuses specifically on theory and basic level empirical demonstrations of the key phenomena, to ensure that the key concepts are as accessible as possible. The aim is to be informative without swamping students with too much information.

Crisp and Turner offer fresh perspectives and succeed in producing a text that will speak effectively to students taking a first course in social psychology and excite them with the field's insights and relevance in their lives --Professor John F. Dovidio, Yale University

The approach is both modern and relevant using recent events to illustrate some of the major issues in social psychology --Christopher R. Jones, University of Sheffield

The writing style and its clear signposting merge the areas and topics very effectively and students cannot fail to appreciate social psychology as a whole rather than its disparate topic areas. In its style it is written in an engaging and everyday style that students will find accessible... A very cohesive text that is easily accessible to students --Dr Sal Watt, Liverpool Hope University

Richard Crisp is a Professor of Psychology at the Aston Business School. He read Experimental Psychology at the University of Oxford and carried out his doctoral research at Cardiff University. In 1999 he took up his first lecturing position at the University of Birmingham, then in 2007 took up his first Chair in the Centre for the Study of Group Processes at the University of Kent. After a three-year term as Head of School, in 2012 he was appointed Chair in Psychology at the University of Sheffield. He moved to his current position at the Aston Business School in 2014. Richard’s research has covered the full range of topics that comprise social psychology, from studies on the formation and reduction of prejudice, to the self and identity processes involved in interpersonal relations, from studies of mere exposure and attitude formation, to studies of social categorization. He has published this work in over 130 articles, chapters and books, including papers in American Psychologist, Psychological Science, Psychological Bulletin and Science. This work has been recognized with awards from scholarly societies including the British Psychological Society Social Psychology Mid-Career Prize and Spearman Medal. Together with Rhiannon Turner he received the 2011 Gordon Allport Intergroup Relations Prize from the Society for the Psychological Study of Social Issues (for the best paper of the year on intergroup relations). He is Editor-In-Chief of the Journal of Applied Social Psychology and former Deputy Chair of the British Psychological Society’s Research Board. He is an Academician of the Academy of Social Sciences, Fellow of the Association for Psychological Science and Fellow of the British Psychological Society.