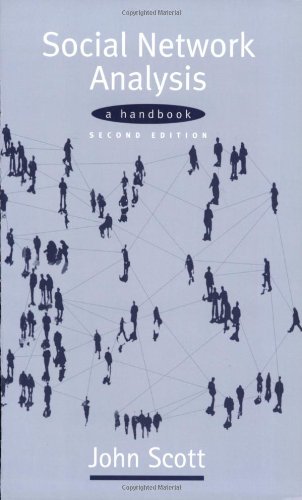 The revised and updated edition of this bestselling text provides an accessible introduction to the theory and practice of network analysis in the social sciences. It gives a clear and authoritative guide to the general framework of network analysis, explaining the basic concepts, technical measures and reviewing the available computer programs.

The book outlines both the theoretical basis of network analysis and the key techniques for using it as a research tool. Building upon definitions of points, lines and paths, John Scott demonstrates their use in clarifying such measures as density, fragmentation and centralization. He identifies the various cliques, components and circles into which networks are formed, and outlines

'I am often asked by people new to network analysis for something they can read to get a quick sense of the area. I refer them to this book. Now updated, Scott's book continues to be the most accessible introduction to social network analysis. Experts should have two copies: one to use, one to loan' - Ronald S Burt, University of Chicago and European Institute of Business Administration (INSEAD)

Praise for the First Edition:

`This book is essential for those who want to keep up with - and move forward with - the field' - Professor Barry Wellman, University of Toronto

John Scott is an Honorary Professor at the Universities of Essex, Exeter, and Copenhagen. He was formerly a professor of sociology at the Universities of Essex and Leicester, and pro-vice-chancellor for research at the University of Plymouth. He has been president of the British Sociological Association, Chair of the Sociology Section of the British Academy, and in 2013 was awarded the CBE for Services to Social Science. His work covers theoretical sociology, the history of sociology, elites and social stratification, and social network analysis. His most recent books include British Social Theory: Recovering Lost Traditions before 1950 (SAGE, 2018), Envisioning Sociology. Victor Branford, Patrick Geddes, and the Quest for Social Reconstruction (with Ray Bromley, SUNY Press, 2013), Objectivity and Subjectivity in Social Research (with Gayle Letherby and Malcolm Williams, SAGE, 2011).