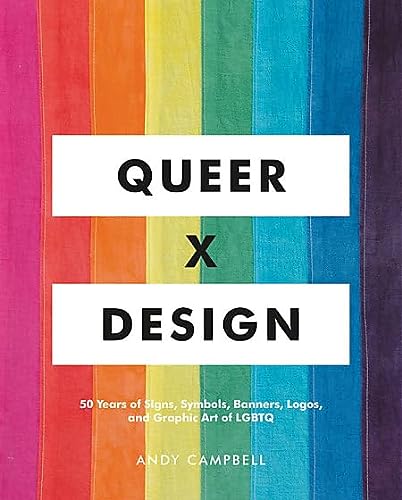 The first-ever illustrated history of the iconic designs, symbols, and graphic art representing more than 5 decades of LGBTQ pride and activism--from the evolution of Gilbert Baker's rainbow flag to the NYC Pride typeface launched in 2017 and beyond.

Organized by decade beginning with Pre-Liberation and then spanning the 1970s through the millennium, QUEER X DESIGN will be an empowering, uplifting, and colorful celebration of the hundreds of graphics-from shapes and symbols to flags and iconic posters-that have stood for the powerful and ever-evolving LGBTQ movement over the last five-plus decades. Included in the collection will be everything from Gilbert Baker's original rainbow flag, ACT-UP's Silence = Death poster, the AIDS quilt, and Keith Haring's "Heritage of Pride" logo, as well as the original Lavender Menace t-shirt design, logos such as "The Pleasure Chest," protest buttons such as "Anita Bryant Sucks Oranges," and so much more. Sidebars throughout will cover important visual grouping such as a "Lexicon of Pride Flags," explaining the now more than a dozen flags that represent segments of the community and the evolution of the pink triangle.

"Sometimes, a rebellion begins with a rebrand. In Queer X Design, the professor Andy Campbell weaves a telling visual tapestry of an emerging L.G.B.T.Q. language and identity."―The New York Times

"A beautifully bound, well-researched book that draws a lineage of LGBTQ designs richer than a thousand rainbow Ralph Lauren polos. Campbell's book details an uncut LGBTQ artistry, spanning digital, print, paint, and even ink n' skin work (check out the Phil Sparrow's Tattoo Flash for that good stuff) -- tracing back to the days of pre-liberation and upward into the 21st century."―The Austin Chronicle

"An entertaining, insightful, beautifully illustrated book that explains and celebrates the role of LGBTQ graphic design, and designers, since the Stonewall uprising in 1969 -- a sort of history of LGBTQ life and activism told through our symbols... [Campbell's] writing is insightful and entertaining and always interesting."―A&U Magazine

"A pretty comprehensive illustrated history of the gay rights movement and how it's changed over the years.... Discover the stories behind some of the most memorable symbols of the past five decades."―HeSaid Magazine

"[Queer X Design] is an anthology of our trek from invisibility into Pride and beyond. It's a fascinating record that contains images that also predate the Stonewall rebellion by more than a quarter century... Between the covers of Queer X Design, you'll find photos that delight, artwork that seethes with rage, and images that have united the LGBTQ community in victories and setbacks throughout the struggle for equality."―Metrosource

"An empowering visual history of the iconic symbols and designs that defined many eras of the LGBTQ movement."―The Globe and Mail

"Queer X Design highlights and celebrates the many inventive and subversive designs that have helped drive the LGBTQ movement over the years...it's an inspiring and colourful visual history of design harnessed to bring about political and societal change."―CreativeBloq

Published in celebration of the 50th anniversary of Stonewall and the Gay Pride Parade, this is the first-ever illustrated history of the iconic art, symbols, and design that represent more than 5 decades of LGBTQ pride and activism-from the evolution of Gilbert Baker's rainbow flag to the NYC Pride typeface launched in 2017.