Articoli correlati a Wealth and Democracy: A Political History of the American...

Phillips, Kevin P. Wealth and Democracy: A Political History of the American Rich

Wealth and Democracy: A Political History of the American Rich 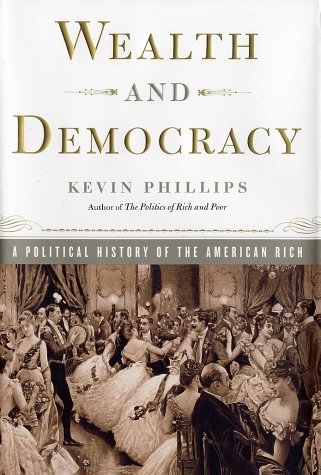 The author of The Politics of Rich and Poor explores the history of the American rich, from the founding of the nation to the present day, exposing a detrimental political pattern that has hindered the democratic process and profoundly impacted our nation's economy.

KEVIN PHILLIPS has been a political and economic commentator for more than three decades. He is currently a regular contributor to the Los Angeles Times and National Public Radio, and also writes for Harper’s Magazine and Time. The author of nine other books, most recently The Cousins’ Wars, he lives in Litchfield, Connecticut.

THE EIGHTEENTH AND NINETEENTH CENTURIES: FROM PRIVATEERSMEN TO ROBBER BARONS

The people who own the country ought to govern it.
--John Jay, first chief justice of the United States, 1787

Many of our rich men have not been content with equal protection and equal benefits, but have besought us to make them richer by act of Congress. --Andrew Jackson, veto of Second Bank charter extension, 1832

Corruption dominates the ballot-box, the Legislatures, the Congress and touches even the ermine of the bench. The fruits of the toil of millions are boldly stolen to build up colossal fortunes for a few, unprecedented in the history of mankind; and the possessors of these, in turn, despise the Republic and endanger liberty. --National platform of the Populist Party, 1892

The debate over the compatibility of wealth and democracy is as old as the republic. From the start, concern that the egalitarian-seeming United States of the late eighteenth and early nineteenth centuries might develop wealth concentrations to match Europe's was a worry for many but also the guarded hope of an important few.

Alexander Hamilton, who favored both a financial class and an aristocracy, would have cherished the possibility of such an elite. John Adams, who thought aristocracies inevitable, would not have been surprised. Thomas Jefferson brooded that such a danger could flow all too easily from urban growth, finance, and commerce. Richard Price, the British reformer friendly to the American Revolution, warned the new nation against foreign banks and finance; and Alexis de Tocqueville, in 1837, hedged his praise for democracy in America with concern that the new industrial elite, "one of the harshest that ever existed," would bring about the "permanent inequality of conditions and aristocracy."

By the beginning of the twenty-first century, when the first clocks along the international date line struck midnight, the United States had met, at least broadly, the hopes of Hamilton and the fears of Jefferson and de Tocqueville. The transformation was hardly linear, given the interruptions of the populist and progressive eras and the New Deal. By 2000, however, the United States was not only the world's wealthiest nation and leading economic power, but also the Western industrial nation with the greatest percentage of the world's rich and the greatest gap between rich and poor.

To make this transformation from agrarian republic to financial aristocracy fully come alive--to fill in its enormous achievement, recurrent corruption, amazing technological innovation, and political pretense--the best course is to begin in the Massachusetts seaports of Adams and John Hancock, the Virginia plantations of Jefferson and George Washington, and the Manhattan financial district of Hamilton, taking nineteenth-century turnpikes and canals to the railroads, stock exchanges, Civil War battlefields, and William Jennings Bryan's angry farm belt and moving on to Hollywood, the World War II defense industries, and Silicon Valley, and always keeping an eye on two principal centers of influence, Washington and Wall Street. By the end of the period covered by this first chapter, from the 1770s to 1900, wealth had enjoyed a glorious century and a quarter. The largest fortune in the United States had grown from an ambiguous $1 million to somewhere in the $300 to $400 million range.

Democracy, in her allegorical garb, was by then wandering around Washington more than a little woebegone, muttering about "the shame of the Senate," watching a U.S. Supreme Court unabashedly hold for railroads in fifteen of sixteen cases, condemning New York City tenements that matched the worst of East End London, and glooming about the lost world of Jefferson, Jackson, and Lincoln.

The unusual political freedom in the U.S., to be sure, was part of what made wealth more openly controversial than it was in Europe. Suspicion of aristocracy, officialdom, and inherited riches was a legacy of the Revolution. Like the earlier citizenry of the Greek and Roman republics, Americans could and did take issue with the abuses of the rich and powerful. Voters could even expect, in some matters, to bring the upper classes to heel. That was part of what republicanism was all about.

Other facets of democracy, however, made wealth in the early United States less controversial. Those from poor backgrounds had a chance, sometimes a better one, to share, as along Cornelius Vanderbilt's scrappy, cutthroat New York waterfront or in John Jacob Astor's rough-and-tumble frontier fur business. Self-made men were the best-known standard-bearers of wealth. A humble immigrant could become the richest man in America, because two did--French-born Stephen Girard, who came to Philadelphia as a merchant ship officer, and Astor, son of a poor German butcher.

The egalitarian-minded working classes of New York and Philadelphia, as we will see, quickly rallied against the Federalist merchants and financiers of the 1790s, with their predilection for British manners and contempt for the common man. Neither of these self-made businessmen had such vulnerabilities: Girard, besides being a supporter of the antiaristocratic French Revolution, was ugly; Astor was uncouth, with relatively little social pretense. Most of the Frenchman's clerks dressed better than he did, and Astor and his son handled and "beat" their own furs well into their second decade of business. Neither put on aristocratic airs or offended republican sensibilities.

In such hands, riches symbolized the New World's promise, not some vague prospect of oppression. In contrast to stratified Europe, the more fluid society in America offered a double opportunity: both to make money and to criticize its abuse by the rich, pointing out how excess wealth and stratification undercut the democracy that had nurtured them.

How this duality evolved during the eighteenth, nineteenth, and twentieth centuries provides an essential backdrop to the circumstances of the twenty-first. And our saga can begin, fittingly, amid the distrust and suspicion rife in Philadelphia during the famous July of 1776, mere blocks from the very birth chambers of the new nation, where hot and tired delegates were just putting the finishing touches on the Declaration of Independence.

Many of the declaration's signers were representatives of America's richest families--a Massachusetts Hancock, a New York Livingston, a Carroll of Maryland, a Lee of Virginia, and a South Carolina Rutledge. Theirs was a revolutionary document with respect to Britain, but not in matters domestic. King George III might be charged with repeated injuries, usurpations, and tyrannies and with sending a swarm of officers to harass Americans and "eat out their substance," but not even Jefferson thought to condemn him for setting the rich above the poor. Hierarchy was a fact of life in the eighteenth-century American colonies.

And so only a few hundred yards from Carpenters' Hall, where the declaration's signers met, disgruntled artisans, storekeepers, and militiamen could be found plotting their own cause in small, sparsely furnished homes and unfashionable taverns like the Four Alls on Sixth Street or the Wilkes and Liberty on Arch Street. Pennsylvania's July 8 selection of delegates to its state constitutional convention was just days away, and they aimed to be in control.

Only supporters of independence were allowed to vote, Tories being barred, and with prewar property requirements also set aside, radicals dominated. Part of what goaded those who were about to give Pennsylvania a state constitution was the increasing concentration of Philadelphia wealth and power among a small capital city elite. At the beginning of the eighteenth century, middling artisans claimed 17 percent of Philadelphia's recorded wealth. By 1720 this had dropped to 12 percent and in the decade before the Revolution to just 5 percent. During the same period the assets of the most prosperous 4 percent of Philadelphians jumped from 25 percent of the citywide total to 56 percent, luxury proclaiming itself in everything from new mansions and expensive carriages to glittering dinner parties.

The radical architects of the new state constitution took indirect aim at these disparities by expanding the franchise, limiting the terms of state legislators, and opening sessions to the public. They even specified that final passage of bills should be delayed until their contents could be published in the state's newspapers and debated by the general public. But in the Declaration of Rights attached to the Constitution, they were more direct, declaring that government existed for the "Common Benefit, Protection and Security of the People, Nation or Community, and not for the particular Emolument or advantage of any Single man, family or Set of Men, who are only part of that community." This was bold talk for the eighteenth century, and many delegates had supported an even stronger Sixteenth Article, narrowly rejected, which stated that "an Enormous Proportion of Property vested in a few Individuals is dangerous to the Rights, and Destructive of the Common Happiness of Mankind; and therefore, every free State hath a right by its Laws to discourage the Possession of Such Property."

These complaints had an element of prophecy. Similar resentments have burst forth at frequent intervals in U.S. history. And if grumbles about economic unfairness are not quite as American as the Fourth of July, one may suggest that they are as American as the eighth of July, the day Pennsylvania activists chose their radical constitutionmakers. We will see these angers in clash after clash, sometimes as a bold banner, sometimes as a subtext of unrelieved frustration.

It would be a mistake, though, to imply that such confrontations were a staple of prerevolutionary America. They were not. The British North American colonies, outside New England, being ethnically and religiously mixed, had more of these kinds of di...

6. Wealth and Democracy: A Political History of the American Rich