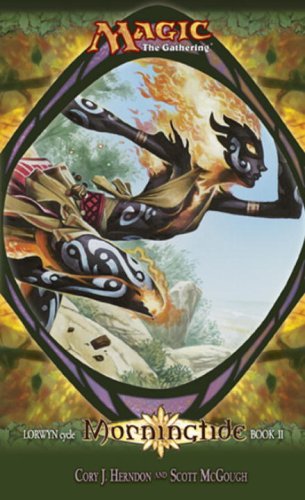 Discover the secrets of the next Magic release in Morningtide!

Hunted by his own people and fleeing a pastoral world gone mad, Rhys must struggle not only to solve the mystery behind his master's cryptic suicide, but also to survive.

Cory J. Herndon wrote his first novel, the Dungeons & Dragons tale The Living Dead, in the shoes of T.H. Lain. Since then he has written for Magic: The Gathering novels and one short story under his own name, including the Ravnica cycle, The Fifth Dawn, and "Like Spider's Silk" from the Secrets of Magic anthology. By day he writes stories and dialogue for the MMORPG Pirates of the Burning Sea.

Scott McGough has studied writing at Johns Hopkins and the University of Washington, and has since written ten Magic: The Gathering novels (eight on his own, two with help), including the Kamigawa Cycle, The Legends Cycle Two, and the Time Spiral Cycle (with co-authors).