Articoli correlati a The Trees of North America: Michaux and Redoute's... 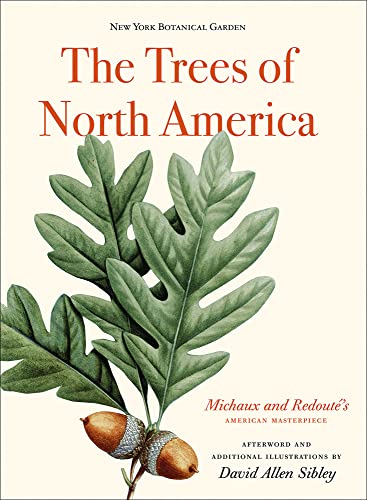 A remarkable selection of American forest trees surveyed by François-André Michaux and Thomas Nuttall from The North American Sylva, held in the LuEsther T. Mertz Library of The New York Botanical Garden, featuring illustrations by celebrated botanical artists such as Pierre-Joseph Redouté and Pancrace Bessa, with an afterword by natural history artist David Allen Sibley

François-André Michaux (1770–1855) was a French botanist whose work on the trees of North America gave the world’s first illustrated account of American trees east of the Mississippi. From 1841 to 1849 Thomas Nuttall (1786–1859), an English botanist and one of the greatest plant explorers of North America, prepared supplementary volumes to Michaux’s landmark work, The North American Sylva.

Full-color reproductions of all of the more than 270 plates are now included in a single volume for the first time. Mirroring Abbeville’s best-selling National Audubon Society Birds of America, the book includes capsule summaries of every tree species featured, written by New York Botanical Garden staff, along with reference illustrations by David Allen Sibley.

The New York Botanical Garden hosts more than one million annual visitors to its 250-acre National Historic Landmark site, which features over one million living specimens, as well as one of the world’s preeminent plant research and conservation programs. Founded in 1899, the Garden’s Mertz Library is one of the largest, most comprehensive botanical libraries in the world.

David Allen Sibley is one of the world’s best-known natural history illustrators and the author of acclaimed field guides, including The Sibley Guide to Trees, which have sold more than one million copies.

Susan M. Fraser is Vice President and Director of the LuEsther T. Mertz Library at The New York Botanical Garden.

Marta McDowell is a gardener, lecturer, and horticultural writer. Her books include All the Presidents’ Gardens (2016) and Beatrix Potter’s Gardening Life (2013), winner of the Gold Award from the Garden Writers Association.

The importance of the seminal works of father-son team André (1746–1802) and François-André (1770–1855) Michaux and Thomas Nuttall (1786–1859) to the study of American forestry as well to the foundation of The New York Botanical Garden’s LuEsther T. Mertz Library Collection cannot be overstated.

André’s Flora Boreali-Americana (1803) was the first American flora and François-André’s The North American Sylva (1817), with supplementary volumes by Nuttall in the 1840s, was the first silva . The latter remained a standard work for the study of North American woody plants throughout the 19th century. NYBG was founded in 1891 (its 250-acre site selected primarily because of stands of centuries-old trees and great diversity of woodland plants), and trees of this continent were an early area of research by its scientists. Shortly thereafter, the Garden’s library was formed with high ambitions to become a comprehensive repository about the plants of the world. The Michaux work, in all of its many editions in French and English was—and continues to be—one of its most important acquisitions. We are delighted to present these important illustrations in a new volume on the occasion of the 125th Anniversary of The New York Botanical Garden.

In the 1890s, the Garden’s founding Board established the Special Book Fund to acquire the antiquarian and rare materials that would form the base of our now world-renowned library. Philanthropists such as Andrew Carnegie and J.P. Morgan were among the principal donors to the Fund. Founding Director Nathaniel Lord Britton and his colleagues used this support to acquire thousands of rare books and illustrated folios for the new library. The first editions of The North American Sylva and other volumes by Michaux were acquired at this time. We have continued to add to the Michaux collection, including through an ongoing gift of works from the library of David L. Andrews, M.D., starting in 2002.

Some of our original editions of Michaux came from the collection of David Hosack, M.D. (1769–1835), who not coincidentally founded our predecessor institution, the Elgin Botanic Garden (1801–1812), the first botanical garden in New York City. Notably, among the volumes that Dr. Andrews donated was also a signed and numbered edition from the personal library of John Torrey, M.D., the father of American botany.

It is natural that much of our collection has come from the libraries of physicians. There has always been a close connection between the medical profession and plant science, and many early botanists were themselves physicians. Both Hosack and Torrey held the position of chair of the botany department at Columbia College, and were instrumental in fostering the expansion of materia medica and botanical knowledge, which was vital to medical practice. This interest propelled New York City to become the center of American botanical scholarship in the early 19th century.

New York City’s continued prominence in plant science coincided with public interest in American natural history, ornamental horticulture, and Romantic garden design, as well as the growth of the nursery and seed industries—of which the Michaux, father and son, were involved through the nursery they ran for many years in New Jersey. The final push was the reform-minded City Beautiful Movement, which spurred the creation of the City’s great cultural institutions at the end of the 19th century, including NYBG.

Since then, the Mertz Library has become the premier library of botanical works in the world. Each year, thousands of researchers from a variety of science and humanities disciplines, including molecular systematics, plant genomics, the history of science, new world exploration, garden and landscape history, botanical illustration, the book arts, and urban ecology, consult these wonderful collections.

The Mertz Library has been generously funded over many years by the LuEsther T. Mertz Charitable Trust as well as The Andrew W. Mellon Foundation, the National Endowment for the Humanities, and many others. The Library currently holds more than 1.3 million physical and digital items, including more than 18,000 rare volumes dated before 1850 and comprehensive, pre-Linnean collections of Medieval and Renaissance herbals, and large and small folios, alongside the latest botanical and horticultural publications. We also have one of the most active digitization programs of any botanical garden in the world, and are a founding member of the Biodiversity Heritage Library.

I would like to thank Susan M. Fraser, NYBG Vice President and Director of the Mertz Library, for engendering this project and contributing an essay on the publication history of The North American Sylva. She also organized a group of Garden staff to verify plant names and write the short species descriptions. They are acknowledged individually on page ##. We are also indebted to garden historian Marta McDowell and artist-naturalist David Allen Sibley whose own essays establish the context for this remarkable work.

2. The Trees of North America: Michaux and Redoute's American Masterpiece

Descrizione libro Abbeville Press, 2017. Hardcover. Condizione: New. Hardcover. A rediscovered landmark of American forestry from the New York Botanical Garden, with illustrations by the great Pierre-Joseph Redoute and commentary by natural history artist David Allen .Shipping may be from multiple locations in the US or from the UK, depending on stock availability. 384 pages. 1.349. Codice articolo 9780789212764

4. The Trees of North America (Michaux and Redoute's American Masterpiece)

5. The Trees of North America: Michaux and Redoute's American Masterpiece

7. The Trees of North America (Michaux and Redoute's American Masterpiece)

8. The Trees of North America: Michaux and Redoute's Groundbreaking Masterpiece