Articoli correlati a 101 Ways to Kill a Zombie 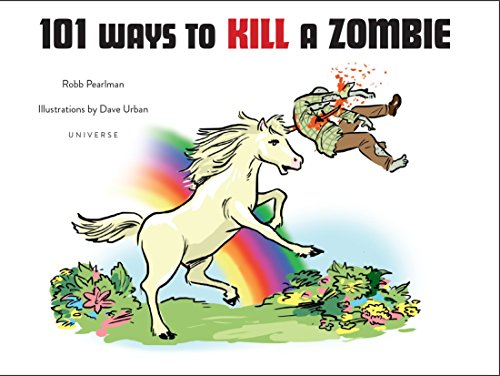 An uproarious, gift-appropriate riff on zombie pop culture, published to coincide with the premiere of The Walking Dead Season 4, is designed to keep fans laughing throughout the upcoming brain-consuming apocalypse.

“The pictures do most of the talking in this humorous new book that features popular zombie elimination weapons, to more unconventional ones, including nerd rage...Dave Urban’s full color illustrations are detailed and often hilarious...I would encourage you to check out 101 Ways to Kill a Zombie.” ~Popcultureguys.com

"This accessible, affordable, and Gorey-like (and gory) book showcases inventive methods to off everyone's favorite lovable, decaying undead. More sidesplitting than an evisceration, Pearlman's 101 Ways to Kill a Zombie will keep readers laughing throughout the upcoming apocalypse." ~Forbidden Planet

“The dynamic duo offers a plethora of pop-culture savvy ways to rid the world of pesky walkers including Nerd Rage, Red Shirt and Axe –the body spray, which can be even more deadly than the weapon/tool. The book is loaded with tongue-in-cheek snark and is a great gift book –it’s a quick read, and one that you’ll return to again and again, because you’ll want to pull the book out and show your friends. The book is good for laughs...Yeah, zombies are mainstream now—but 101 Ways to Kill a Zombie is all about pointing that out and laughing at it.” ~Watchareading.com

“A lighthearted and meta take on the genre, each zombie death is rooted in traditional zombie lore, new zombie tropes, and executed through humor and fun.” ~Midtowncomics

Robb Pearlman is an editor, author, and pop-culture junkie. The author of six books, Pearlman has steered the multimillion-dollar publishing and licensing campaigns for Nancy Drew and The Hardy Boys and is now a senior editor at Rizzoli, where he also directs the Universe calendar division. Dave Urban is an award-winning artist whose illustrations graced the pages of the New York Times best-seller Eats, Shoots & Leaves, The New Yorker, and several advertising and editorial campaigns.