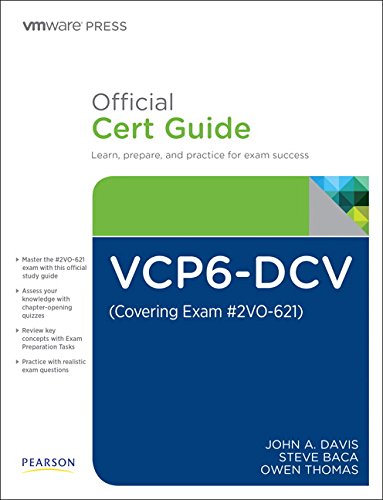 VCP6-Official Cert Guide presents you with an organized test-preparation routine through the use of proven series elements and techniques. “Do I Know This Already?” quizzes open each chapter and enable you to decide how much time you need to spend on each section. Exam topic lists make referencing easy. Chapter-ending Exam Preparation Tasks help you drill on the key concepts you must know thoroughly.

The companion DVD contains a powerful Pearson IT Certification Practice Test engine that enables you to focus on individual topic areas or take a complete, timed exam. The assessment engine also tracks your performance and provides feedback on a module-by-module basis, laying out a complete assessment of your knowledge to help you focus your study where it is needed most.

John A. Davis, now a product architect at Rackspace, became a VMware Certified Instructor (VCI) and VMware Certified Professional (VCP) in 2004. Since then, all of his work has been completely focused on VMware-based technologies. He has experience in teaching official VMware curriculum in five countries and delivering VMware professional services throughout the United States. Recently, his work has involved designing solutions based on vRealize Operations and Site Recovery Manager. He has authored several white papers and co-authored the VCAP5-DCA Cert Guide (VMware Press). He holds several advanced certifications, including VCAP5-DCA, VCAP5-DCD, VCAP5-DTD, VCAP5-CID, and VCIX-NV. He has been a vExpert since 2014. He is author of the vLoreBlog.com and can be found on Twitter @johnnyadavis.

Steve Baca, VCAP, VCI, VCP, and NCDA, has been in the computer industry for more than 20 years. Originally a computer programmer and a system administrator working on Unix and Windows systems, he migrated over to technical training and wrote a course for Sun Microsystems. After teaching various courses for Sun, he eventually transitioned to VMware about 8 years ago, doing technical training and consulting as well as teaching for NetApp. Currently he lives in Omaha, Nebraska, and does a number of worldwide engagements. He thoroughly enjoys teaching and writing and believes that the constant evolution of the computer industry requires continuously learning to stay ahead. Steve can be found on Twitter @scbaca1.

Owen Thomas, VCI Level 2, VCP-DCV, VCP-Cloud, VCP-DT, VCAP-DCA, has been teaching various VMware classes since 2008. His first major IT position was in an enterprise-level NOC in Louisville, Kentucky, where he started in 2000 as a backup operator and transitioned to the role of NOC analyst. As his experience increased, he was tasked with training new staff. Introduced to VMware as of version 2 and trained in VI3, he became a VMware Certified Instructor at the end of 2007. Since then, he has taught hundreds of VMware classes for open enrollment and onsite classes for customers. Owen is a VMware partner and solutions provider as well as a technical trainer and performs JumpStarts, Audits, HealthChecks, Capacity Planning, and P2V migrations for SMBs.