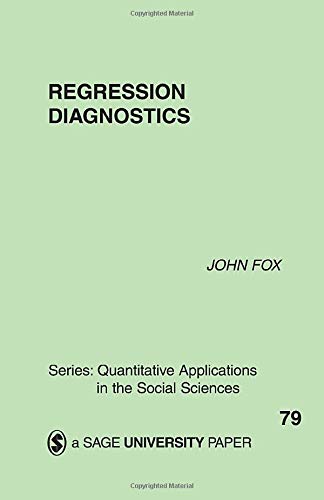 With Regression Diagnostics, researchers now have an accessible explanation of the techniques needed for exploring problems that compromise a regression analysis and for determining whether certain assumptions appear reasonable. The book covers such topics as the problem of collinearity in multiple regression, dealing with outlying and influential data, non-normality of errors, non-constant error variance and the problems and opportunities presented by discrete data. In addition, sophisticated diagnostics based on maximum-likelihood methods, scores tests, and constructed variables are introduced.

John Fox received a BA from the City College of New York and a PhD from the University of Michigan, both in Sociology. He is Professor Emeritus of Sociology at McMaster University in Hamilton, Ontario, Canada, where he was previously the Senator William McMaster Professor of Social Statistics. Prior to coming to McMaster, he was Professor of Sociology, Professor of Mathematics and Statistics, and Coordinator of the Statistical Consulting Service at York University in Toronto. Professor Fox is the author of many articles and books on applied statistics, including \emph{Applied Regression Analysis and Generalized Linear Models, Third Edition} (Sage, 2016). He is an elected member of the R Foundation, an associate editor of the Journal of Statistical Software, a prior editor of R News and its successor the R Journal, and a prior editor of the Sage Quantitative Applications in the Social Sciences monograph series.

1. Regression Diagnostics: An Introduction (Quantitative Applications in the Social Sciences)

4. Regression Diagnostics: An Introduction (Quantitative Applications in the Social Sciences)

5. Regression Diagnostics: An Introduction (Quantitative Applications in the Social Sciences)