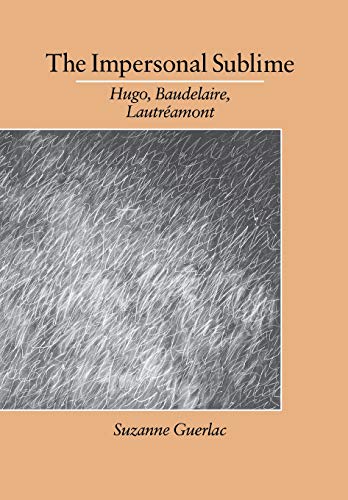 The question of the sublime, which links the idea of aesthetic force with rhetorical impact and moral law, has been an important topic in discussion of eighteenth- and nineteenth-century art and the shift between them. This book argues that the sublime is equally important in understanding the shift from romanticism to modernism later in the century. The author studies the work of three French authors conventionally considered pivotal figures in the trajectory from romanticism to modernism: Hugo, father of romanticism; Baudelaire, precursor of symbolist modernism; and Lautreamont, hero of (post) modernism. She traces this literary-historical as Hugo's Quatre-vingt-treize and L'Homme qui rit, Baudelaire's Spleen de Paris and Petits poemes en prose, and Lautreamont's Chants de Maldoror and Poesies - all seen from a perspective of the aesthetics of the sublime. This perspective is developed through analyses of the treatises on the sublime by Longinus, Boileau, Burke, and Kant. The author blends three points of view in her exploration - historical, theoretical, and literary - and demonstrates that specific questions relevant to our comprehension of romanticism, modernity, and the sublime pervade the texts studied. While each reading is meant to stand on its own and to respect the specificity of the work in question (as well as the broader commitments of that writer), the author suggests that a developing argument concerning the sublime can be appreciated only by following the connections made in the passage from one text to another. Finally, the author argues against the dominant critical treatment of the sublime in the Anglo-American context, which analyzes the sublime in phenomenological terms and associates it with a psychoanalytic notion of sublimation. Hugo, Baudelaire, and Lautreamont reveal the sublime to be at work in the modern French context in a desublimating and nonphenomenological mode, one that is ultimately more compatible with fundamental issues at stake in the sublime - such as the enhancement of, and challenge to, the notion of the aesthetic per se that characterizes art developments in the modern period.<