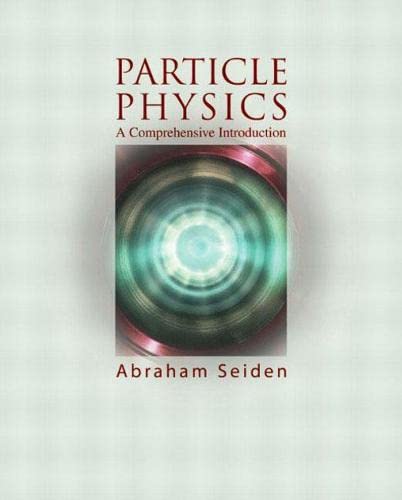 ... a very complete presentation ... for graduate students in physics. The approach is pedagogical and ... a large number of detailed calculations are provided ... [that are] of particular use to students planning experimental work. Highly recommended. ― Reprinted with permission from CHOICE, copyright by the American Library Association.

Professor Abraham Seiden is the Director of the Santa Cruz Institute for Particle Physics, an organized research unit at the University of California, Santa Cruz. The institute has about 30 Ph. D. level scientists and focuses on research in particle physics, particle astrophysics, and areas such as neurobiology, where technical innovations from particle physics allow unique contributions to other fields. He has been on the faculty at UCSC since 1978 and Director of the Institute from 1981. He was elected a Fellow of the American Physical Society in 1989 and was chosen for the Outstanding Faculty Award in the Natural Sciences at UCSC in 1995.

Professor Seiden received a B.S. in Applied Physics from Columbia University in 1967. He received a M.S. in Physics from Caltech in 1970 and his Ph.D. from UCSC in 1974. His physics interests have included models for quark fragmentation and deep inelastic scattering; weak decays of heavy mesons, CP violation and mixing; and electroweak symmetry breaking at the next hadron collider.

Professor Seiden has been the leader of a large number of detector construction projects for experiments in particle physics at accelerator centers throughout the world. This has included leading the construction of several large drift chambers and more recently particle tracking detectors using arrays of silicon detectors and VLSI electronics. His present focus is on particle tracking in the ATLAS detector at the Large Hadron Collider at CERN in Geneva, Switzerland.

In addition to his own work, Professor Seiden has been a leader in various policy areas in physics. He has chaired the Scientific Policy Committee of the Stanford Linear Accelerator Center and been a member of the Scientific Policy Committee at the CERN accelerator center in Geneva, Switzerland. He has chaired the program committee for the LIGO gravity wave experiment. Professor Seiden has served on the High Energy Physics Advisory Panel (HEPAP), which reports to the DOE and NSF, as well as several HEPAP subpanels. He is presently the chair of the Particle Physics Project Prioritization Panel (P5, a HEPAP subpanel), which maintains a 20-year plan for the field as well as making recommendations on priorities for construction projects in the $50 million to $600 million range.