Articoli correlati a Poetic Justice: The Literary Imagination and Public... 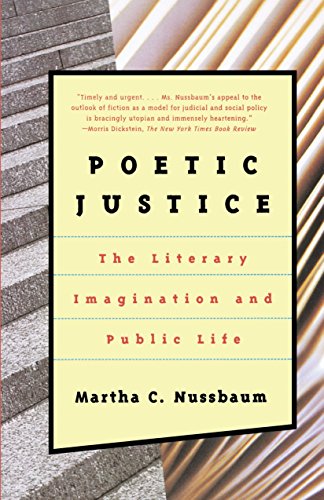 In Poetic Justice, one of our most prominent philosophers explores how the literary imagination is an essential ingredient of just public discourse and a democratic society.

Those staid souls who always wondered what novels were good for now get to hear it from Nussbaum (Ethics/Univ. of Chicago; The Therapy of Desire, 1994, etc.), who instructs us in the use of imaginative empathy as one of the necessary tools for living the just life. Nussbaum argues elegantly that the novel, by engaging our sympathy in the contemplation of lives different from ours, expands our imaginative capabilities so we may better make those judgments that public life demands of us. Her sources are carefully chosen: Aristotle, the Stoics, Adam Smith, et al., are called into service appropriately and sparingly. On the down side, the literary examples - Dickens's Hard Times, Richard Wright's Native Son, and E.M. Forster's Maurice - are perhaps too predictable a trio; Nussbaum also makes reference to Whitman, however, which brings some fresh air into the book. Poetic Justice reads like the series of law school lectures it was originally: there is much enumeration of points to be proved before proving them. It alternates between academic mouthfuls and the thoughtful phrase juste (we read that love is "not, in the relevant sense, blind: it perceives its object as endowed with a special wonder and importance"). For whatever reason (perhaps Nussbaum doesn't have the feeling for literature that she does for the law), the book only gets truly interesting with the citation of legal cases, especially the dreadful Mary Jane Carr v. Allison Gas Turbine Division, General Motors Corporation (1994), which begs the question of why the court would rule "mighty" GM powerless to stop mass sexual harassment of a single female worker. Poetic Justice will be most appreciated by philosophers, lawyers, and economists; creative types may be frustrated by the face-value uses the literary passages are put to. Nussbaum's thesis, however, deserves to be shouted from the rooftops - like Whitman's Song of Myself. --(Kirkus Reviews)

Martha C. Nussbaum, author of The Fragility of Goodness, Love's Knowledge, and The Therapy of Desire, is professor of law and ethics at the University of Chicago.