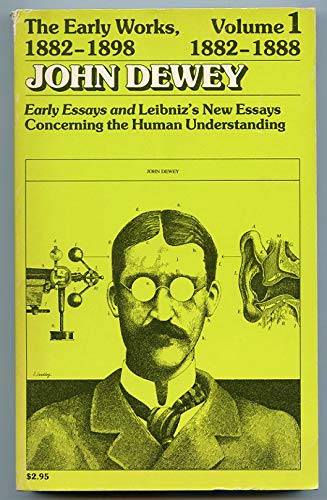 Volume 1 of ?The Early Works of John Dewey, 1882?1898” is entitled ?Early Essays and Leibniz’s New Essays Concerning the Human Understanding, 1882?1888.” Included here are all Dewey’s earliest writings, from his first published article through his book on Leibniz.

The materials in this volume provide a chronological record of Dewey’s early development?beginning with the article he sent to the Journal of Speculative Philosophy in 1881 while he was a high-school teacher in Oil City, Pennsylvania, and closing with his widely-acclaimed work on Leibniz in the Grigg’s Series of German Philosophical Classics, written when he was an Assistant Professor at the University of Michigan. During these years be­tween 1882 and 1888, Dewey’s life course was established: he decided to follow a career in philosophy, completed doctoral studies at Johns Hopkins University, became an Instructor at the University of Michigan, was promoted to Assistant Professor, and accepted a position as Chairman of the Department of Philosophy at the University of Minnesota. With the publication of Psychology, he became well known among scholars in this country; a series of articles in the British journal Mind brought him prominence in British philosophical circles. His articles were abstracted in the Revue philosophique.

None of the articles collected in this volume was reprinted during the author’s lifetime. For the first time, it is now possible for Dewey scholars to study consecutively in one publication all the essays which originally appeared in many periodicals.