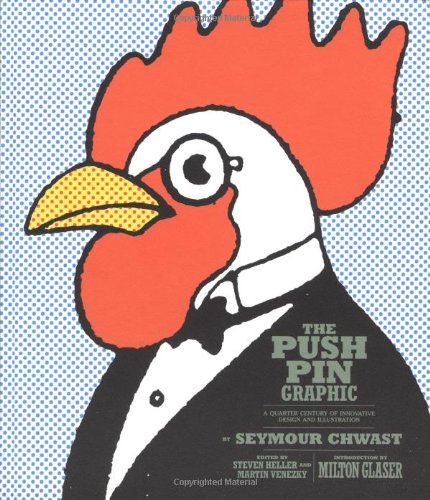 Part design and illustration studio, part pop culture think tank, Push Pin Studios made a phenomenal impact on visual culture from the 1950s to the 1980s, representing an important chapter in postwar graphic design. Founding member Seymour Chwast partners with key figures from the design community -- as well as co-founder Milton Glaser -- to provide a visual history of the studio by way of its signature publication, The Push Pin Graphic. Hundreds of memorable covers and spreads culled from each of the eighty-six inspired and imaginative issues confirms Push Pin's vital role in setting the design curve and influencing the direction of modern visual style. The Push Pin Graphic is the first comprehensive account of a design milestone that continues to influence designers to this day.

Seymour Chwast is co-founder of Push Pin Studios. He has created over 100 posters and has designed and illustrated more than thirty children's books. He lives in New York City.

Milton Glaser is the co-founder of Push Pin Studios and New York Magazine. His graphic and architectural commissions include the "I (Heart) NY" logo. He lives in New York City.

Steven Heller is the art director of the New York Times Book Review. He is the author of over ninety books on graphic design, popular art, and satiric art. He lives in New York City.

Martin Venezky is the director of Appetite Engineers, a design company whose clients include the Sundance Film Festival, San Francisco Museum of Modern Art, and Blue Note records. He lives in Rhode Island.

1. The Push Pin Graphic: A Quarter Century of Innovative Design and Illustration

2. The Push Pin Graphic: A Quarter Century of Innovative Design and Illustration

3. The Push Pin Graphic: A Quarter Century of Innovative Design and Illustration