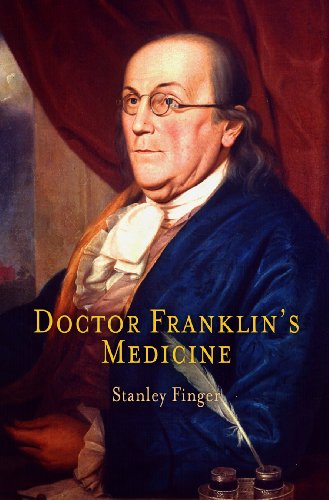 Selected by Choice magazine as an Outstanding Academic Title

Among his many accomplishments, Benjamin Franklin was instrumental in founding the first major civilian hospital and medical school and in the American colonies. He studied the efficacy of smallpox inoculation and investigated the causes of the common cold. His inventions—including bifocal lenses and a "long arm" that extended the user's reach—made life easier for the aged and afflicted. In Doctor Franklin's Medicine, Stanley Finger uncovers the instrumental role that this scientist, inventor, publisher, and statesman played in the development of the healing arts—enhancing preventive and bedside medicine, hospital care, and even personal hygiene in ways that changed the face of medical care in both America and Europe.

As Finger shows, Franklin approached medicine in the spirit of the Enlightenment and with the mindset of an experimental natural philosopher, seeking cures for diseases and methods of alleviating symptoms of illnesses. He was one of the first people to try to use electrical shocks to help treat paralytic strokes and hysteria, and even suggested applying shocks to the head to treat depressive disorders. He also strove to topple one of the greatest fads in eighteenth-century medicine: mesmerism.

Doctor Franklin's Medicine looks at these and the many other contributions that Franklin made to the progress of medical knowledge, including a look at how Franklin approached his own chronic illnesses of painful gout and a large bladder stone. Written in accessible prose and filled with new information on the breadth of Franklin's interests and activities, Doctor Franklin's Medicine reveals the impressive medical legacy of this Founding Father.

Stanley Finger is Professor of Psychology at Washington University in St. Louis, where he teaches in the programs of neural sciences and philosophy-neuroscience-psychology. He has written widely on the history of medicine, and his many books include Origins of Neuroscience and Minds Behind the Brain. Finger is senior editor of the Journal of the History of the Neurosciences.