Articoli correlati a Collecting Across Cultures: Material Exchanges in the... 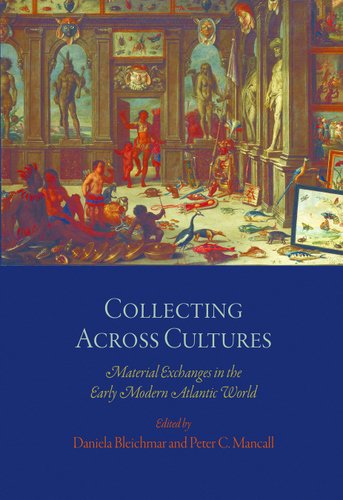 In the early modern age more people traveled farther than at any earlier time in human history. Many returned home with stories of distant lands and at least some of the objects they collected during their journeys. And those who did not travel eagerly acquired wondrous materials that arrived from faraway places. Objects traveled various routes—personal, imperial, missionary, or trade—and moved not only across space but also across cultures.

Histories of the early modern global culture of collecting have focused for the most part on European Wunderkammern, or "cabinets of curiosities." But the passion for acquiring unfamiliar items rippled across many lands. The court in Java marveled at, collected, and displayed myriad goods brought through its halls. African princes traded captured members of other African groups so they could get the newest kinds of cloth produced in Europe. Native Americans sought colored glass beads made in Europe, often trading them to other indigenous groups. Items changed hands and crossed cultural boundaries frequently, often gaining new and valuable meanings in the process. An object that might have seemed mundane in some cultures could become a target of veneration in another.

The fourteen essays in Collecting Across Cultures represent work by an international group of historians, art historians, and historians of science. Each author explores a specific aspect of the cross-cultural history of collecting and display from the dawn of the sixteenth century to the early decades of the nineteenth century. As the essays attest, an examination of early modern collecting in cross-cultural contexts sheds light on the creative and complicated ways in which objects in collections served to create knowledge—some factual, some fictional—about distant peoples in an increasingly transnational world.