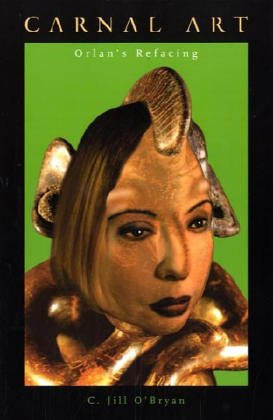 The French artist Orlan is infamous for performances during which her body is surgically altered. In nine such performance surgeries, features from Greek goddesses painted by Botticelli, Gérard, Moreau, and an anonymous School of Fontainebleau artist, as well as from da Vinci’s Mona Lisa, were implanted into Orlan’s face. During her surgical performances, viewers witness a material tampering with the relationship between the face and individual identity, the original and the constructed, a historical critique of the association of art with beauty and the female body.Responding to Orlan’s definition of her performance surgeries as “carnal art,” C. Jill O’Bryan considers how the artist’s ever-fluctuating reconstructions of her face question idealized beauty and female identity, persuasively arguing that Orlan’s surgically reinvented face succeeds in both reinforcing and breaking apart corporeal subjectivity and representation. O’Bryan contextualizes Orlan’s operations within the centuries-long history of public dissections and surgeries, lavish anatomical illustrations created to draw the gaze into the opened anatomy, Artaud’s “Theater of Cruelty” in the early twentieth century, and contemporary works and performances by Cindy Sherman, Hans Bellman, and Annie Sprinkle. A compelling blurring of the line between feminist theory and art criticism, O’Bryan’s close examination of Orlan’s performance surgeries complicates and reconfigures the notion of identity—and its relation to the body—at the very boundary dividing art from identity.C. Jill O’Bryan is an independent scholar and artist who has written and lectured widely on Orlan in particular and body art in general.