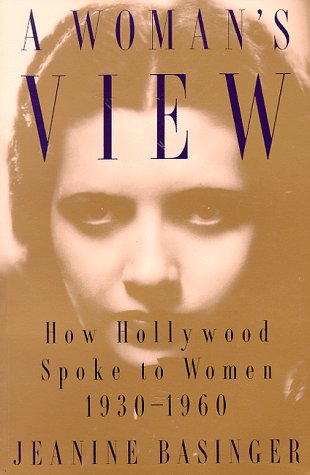 In this highly readable and entertaining book, Jeanine Basinger shows how the "woman's film" of the 30s, 40s, and 50s sent a potent mixed message to millions of female moviegoers. At the same time that such films exhorted women to stick to their "proper" realm of men, marriage, and motherhood, they portrayed -- usually with relish -- strong women playing out liberating fantasies of power, romance, sexuality, luxury, even wickedness.

Never mind that the celluloid personas of Bette Davis, Myrna Loy, Katharine Hepburn, Joan Crawford, or Rita Hayworth see their folly and return to their man or lament his loss in the last five minutes of the picture; for the first eighty-five minutes the audience watched as these characters "wore great clothes, sat on great furniture, loved bad men, had lots of sex, told the world off for restricting them, even gave their children away."

Basinger examines dozens of films -- whether melodrama, screwball comedy, musical, film noir, western, or biopic -- to make a persuasive case that the woman's film was a rich, complicated, and subversive genre that recognized and addressed, if covertly, the problems of women.

JEANINE BASINGER is Corwin-Fuller Professor of Film Studies and Curator of Cinema Archives at Wesleyan University. Her most recent book is Silent Stars (1999), and her other books include American Cinema (1994), The "It's a Wonderful Life" Book (1990), and The World War II Combat Film (1986).