Articoli correlati a Introduction to Quadratic Forms over Fields

Introduction to Quadratic Forms over Fields 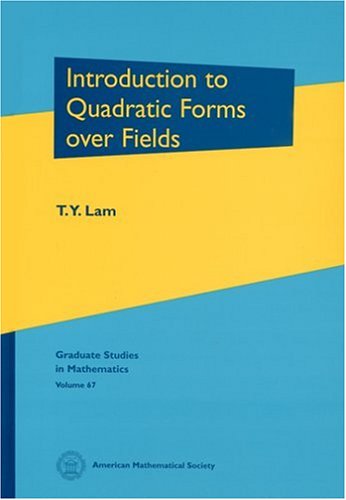 This new version of the author's prizewinning book, Algebraic Theory of Quadratic Forms (W. A. Benjamin, Inc., 1973), gives a modern and self-contained introduction to the theory of quadratic forms over fields of characteristic different from two. Starting with few prerequisites beyond linear algebra, the author charts an expert course from Witt's classical theory of quadratic forms, quaternion and Clifford algebras, Artin-Schreier theory of formally real fields, and structural theorems on Witt rings, to the theory of Pfister forms, function fields, and field invariants. These main developments are seamlessly interwoven with excursions into Brauer-Wall groups, local and global fields, trace forms, Galois theory, and elementary algebraic K-theory, to create a uniquely original treatment of quadratic form theory over fields. Two new chapters totaling more than 100 pages have been added to the earlier incarnation of this book to take into account some of the newer results and more recent viewpoints in As is characteristic of this author's expository style, the presentation of the main material in this book is interspersed with a copious number of carefully chosen examples to illustrate the general theory. This feature, together with a rich stock of some 280 exercises for the thirteen chapters, greatly enhances the pedagogical value of this book, both as a graduate text and as a reference work for researchers in algebra, number theory, algebraic geometry, algebraic topology, and geometric topology.

1. Introduction To Quadratic Forms Over Fields (Graduate Studies in Mathematics)