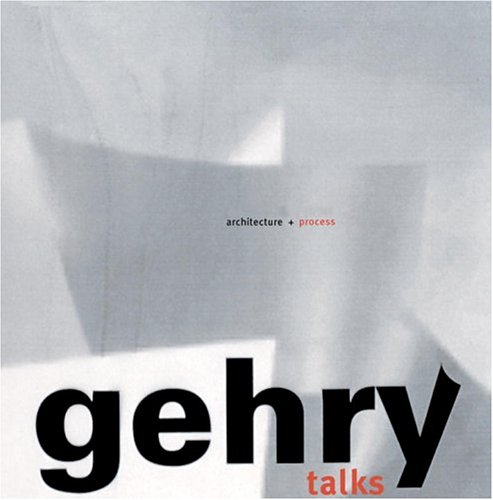 With the completion of the celebrated Guggenheim Museum in Bilbao, Spain, architect Frank O. Gehry has entered the pantheon of twentieth-century masters. In this wholly unique new book, Gehry himself offers extensive and illuminating commentary on various aspects of the proceses involved in developing his revolutionary designs, including his influences, clients, use of materials, and new technologies.

Gehry Talks: Architecture + Process documents all of his new work of this decade, tracing his evolution from a southern California architect known for his idiosyncratic use of materials and collaboration with local artists, to an international figure whose fluid, hitherto undreamt-of forms surge beyond the aesthetic and technical constraints of the twentieth century. From the titanium-wrapped curves of the Guggenheim Bilbao to the binocular facade of the Chiat-Day Headquarters in California, his innovative structural ideas evoke a sense of freedom and spontaneity while, at the same time, displaying the utmot control. Unbound by guidelines of symmetry or the grid's delineation, his structures spring forth, engaged in a seemingly limitless play of ideas--ever-changing in both the multitudinous combinations of shapes suggested by the form and the depth of the conceptual associations implied by the design. Fish and snake motifs birl upon his buildings' rippling surfaces, while light follows the asymmetrical trajectories of their metallic folds. Though controversial and daring, his works always possess an elegance that lends warmth and humane scope to each project, regardless of the level of innovation--as evinced in contexts as varying as the complicated, and unrealized, plan of the Lewis House in Lyndhurst, Ohio or the clarity of the idea behind the Üstra office building in Hannover, Germany.

Mildred Friedman is the editor of Rizzoli's The Architecture of Frank Gehry (1986) and the curator of the 1986 Gehry exhibition at the Walker Art Center.