Articoli correlati a Naked: The Nude in America

Naked: The Nude in America 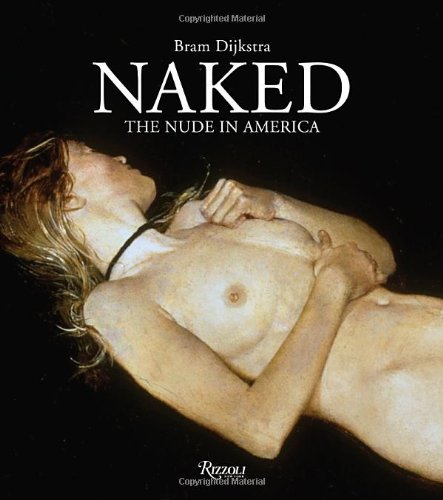 A resplendent presentation of the nude in American art, photography, and popular culture, from the eighteenth century to the present. With more than four hundred color illustrations, this is the most thorough and wide-reaching survey of the representation of the male and female nude in American visual culture yet published. Bram Dijkstra explores the history of the subject from its earliest manifestations in the paintings of John Singleton Copley and Benjamin West to the taboo-shredding imagery of late-twentieth-century artists such as Alice Neel, Robert Mapplethorpe, Eric Fischl, and John Currin. Dijkstra is a cultural historian who refuses to separate "high" and "low" art, charting instead such momentous historical events as the discovery of pubic hair, the invasion of the pin-up queens, "the inexorable rise of the breast," and the puzzling fluctuations of American prudery. Naked also examines the effects of the early twentieth century’s infatuation with Freudian psychoanalysis and the more recent fascination of comic book art with the legacy of Bettie Page and her seemingly ever more muscular daughters. In chronological and thematic order, the book demonstrates the links between the work of some of the most famous names in the history of American painting (Chase, Cassatt, Hopper), sculpture (French, Powers), and photography (Cunningham, Weston), and that of the outlaw hordes of cartoonists, book-cover illustrators, and visual extremists who, particularly during the last half-century, were able to turn the United States into the world’s principal purveyor of erotic fantasies.

"The Sexiest Nude Art You've Never Seen: A gorgeous new book, Naked by Bram Dijkstra, highlights the most famous, eye-popping, game-changing pieces of naked artwork in the world... Check out all of the envelope-pushing paintings, photographs, sketches, and sculptures in the new book Naked: The Nude in America by Bram Dijkstra" ~Cosmopolitan

"Naked is a thorough exploration of America's sometimes puritanical and sometimes perverse relationship with the nude in the visual arts. Dijkstra brilliantly illustrates more than four hundred and twenty American works portraying the naked body in a myriad of manifestations.  The book reads like an incisive lecture, sparing no criticism for American culture and its hypocrisies. The book features gorgeous artworks long hidden in museum vaults for fear of offending conservative patrons. From Andrew Wyeth to racy comicbook covers, Naked reveals the hidden history of the American nude in the first comprehensive book to be published on teh subject in more than thirty-five years. This is more than just an art book -- it is a long overdue statement about America's peculiar attitude towards the naked human body." ~THE

"...gorgeously illustrated book called Naked which explores the traditional, the beautiful, and the shocking in the portrayal of the nude in America... a tremendously beautiful coffee table book." ~KPBS Radio

"Bram Dijkstra’s exploration of the history of nudity in American art is a bit of a two-for-one deal: a hybrid of controversial coffee table book and in-depth social and political treatise on American culture. Dijkstra, professor emeritus of comparative literature and cultural history at UC San Diego, is not a traditional art historian, nor does the work read like an art history book.
Highlighting over 400 pieces depicting both male and female nudes, this eye-catching collection will quickly turn on any reader anticipating a quick flight-through. Dijkstra’s observations are deeply absorbing and unabashedly critical of the zipped-up Puritanism that has forced so many such works of art into the bottom rungs of the fine arts world. The author respectfully declares his subjectivity outright, and the resulting discussion proves irresistibly engaging.
The selected works are organized by conversation topic, illustrating Dijkstra’s ideas and freeing the reader from any tiresome imposition of chronology. In a discussion on the notion of the ‘predatory woman,’ Frank Cho’s ‘Ape & Babe,’ a cartoon-ish watercolor and ink portrayal of a blue gorilla smoking a cigarette and carrying a naked, rose-crowned blond on its back, appears opposite James Allen St. John’s ‘Ave Pan,’ an oil painting of two classically-inspired grape-bunch-wielding nudes making an offering to an idol.
Other talking points range from pinup girls to pubic hair, but the book never strays from its well-informed and refreshingly readable focus on America’s tumultuous relationship with the human body." ~City Arts

Bram Dijkstra is professor emeritus of comparative literature and cultural history at the University of California, San Diego. He is the author of numerous books, including American Expressionism, Art and Social Change, 1920–1950 and Idols of Perversity: Fantasies of Feminine Evil in Fin-de-Siècle Culture.

1. Naked The Nude in America

2. Naked: The Nude in America

3. Naked The Nude in America