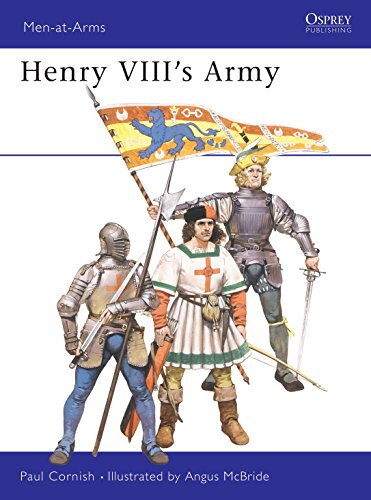 Military affairs occupied a very significant place during Henry VIII's reign, with English armies seeing action against two main enemies: the French and the Scots, of which France was undoubtedly viewed as the principal foe. Henry nursed grandiose ambitions to be acclaimed as the arbiter of European politics, and whilst intervention in European affairs did not necessarily dictate a policy of hostility towards France; England was invariably to be found in league with her enemies in time of war. This absorbing text by Paul Cornish deals with the history, uniforms and equipment of King Henry VIII's army.

Paul Cornish was born in Devon in 1959. He graduated from the University of Birmingham in 1981 and has since pursued a career in museums - firstly at the British Museum, and subsequently at the Imperial War Museum, where he is a curator. Apart from the military history of the early Sixteenth Century, his specialist interests include modern firearms and the material culture of war. He has written a number of articles on military history and lives in Kent, England. Angus McBride is one of the world's most respected historical illustrators, and has contributed to more than 70 Osprey titles in the past three decades. Born in 1931 of Highland parents but orphaned as a child, he was educated at Canterbury Cathedral Choir School. He worked in advertising agencies from 1947, and after national service, emigrated to South Africa. He now lives and works in Cape Town.