Articoli correlati a Dictionary of the Second World War

Dictionary of the Second World War 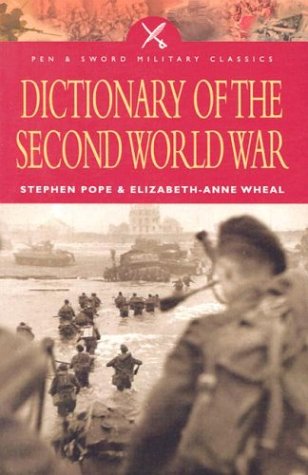 In The Dictionary of the Second World War there are more than 1,600 detailed and analytical entries - together with specially commissioned maps - which cover every aspect of the war.

Theatres: Eastern and Western Europe, North and East Africa, Asia, the Pacific, the Atlantic and the Mediterranean.

Actions and operations from Barbarossa to Overlord, from Midway to Iwo Jima.

Tactics and strategies from submarines to airborne operations, from blitzkreig to area bombing.

Weapons from i.e. Supermarine Spitfire to the B-29 Superfortress, and from Bismarck to the atomic bomb

Armed Forces of all the major combatants, from the Red Army to the USAAF

Commanders from Alexander to Zhukov, from Kesselring and Kleist to Koga and Kondo

Politicos and diplomacy from Tripartite Pact to United Nations, from Ribbentrop to Roosevelt, from propaganda to Allied Conferences

A host of other topics are covered, from resistance to women to anti-Semitism, from communism to intelligence services to the Final Solution, making this an essential companion for anyone with an interest in World War II, and the history of the twentieth century.