Articoli correlati a The Funeral Effigies of Westminster Abbey

The Funeral Effigies of Westminster Abbey

The Funeral Effigies of Westminster Abbey 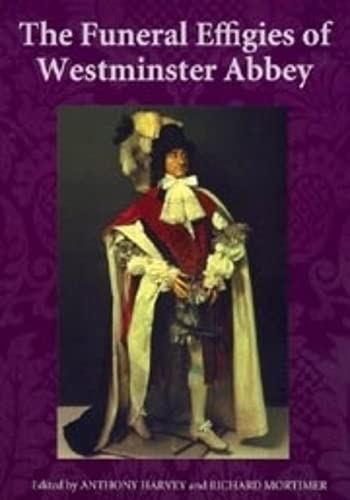 The funeral effigies housed in their own quarters in the Norman undercroft are one of the most remarkable yet little-known treasures of Westminster abbey. They derive from a time when an effigy of the dead monarch, statesman or national hero played an important part in funeral ritual, offering a visible likeness as a focus to the ceremonial of the funeral. Surprisingly moving when gathered together, this unexpected pantheon of celebrities includes remarkable medieval wood effigies and later wax figures in contemporary clothing. Among the unique and important group of portrait busts, the death mask of Edward III (1377) dates back to the beginnings of portraiture in medieval Europe; other fine examples include Henry VII, Charles II, Pitt, and Nelson. The collection is also remarkable for its rare historic costumes, including Charles II's Garter robes, Nelson's hat, extraordinary Georgian paste jewellery, rare early silks and shoes, and probably the oldest stuffed bird in England. Some objects are illustrated in this book for the first time, others since their damage in the last war and subsequent restoration. An account of the restoration, a history of the collection, and a discussion of the significance of each object accompany the detailed descriptions of the effigies. This richly illustrated book is the first substantial publication on the funeral effigies of Westminster Abbey since 1936, The expertise of a distinguished group of international specialists has been drawn upon for this book; they are JANET ARNOLD, PATRICIA BLACKETT BARBER, CLAUDE BLAIR, SHIRLEY BURY, HUBERT CHESSHYRE, AVRIL HART, ANTHONY HARVEY, VALERIE KAUFMAN, SHEILA LANDI, JOHN LARSON, SANTINA LEVEY, PHILLIP LINDLEY, JULIAN LITTEN, RICHARD MORTIMER, NATALIE K.A. ROTHSTEIN, JUNE SWANN.

Enthralling. COSTUME Scholarly, well-footnoted and copiously illustrated... essential reading for those interested in the personages, and for historians of costume. ENGLISH HISTORICAL REVIEWA fascinating and very useful catalogue. COSTUME