Articoli correlati a Deceptions and Illusions: Five Centuries of Trompe... 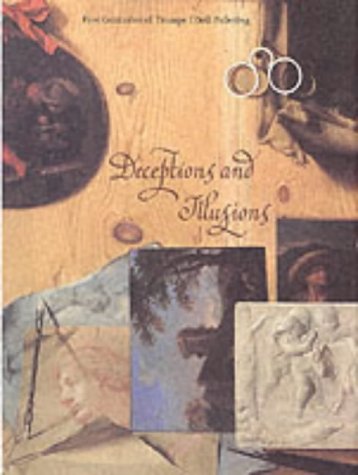 Trompe l'oeil, French for "fool or deceive the eye", is a genre dating back to antiquity that has fascinated both painters and viewers from the Renaissance to the present day. Both witty and serious, it describes paintings that imitate natural appearances so convincingly that viewers momentarily mistake the objects depicted for the real thing. The moment of deception, however, is brief. Uncertainty over what is real and what is illusion is soon replaced by amusement at having been tricked and admiration for the artist's ingenuity and skill.
Deceptions and Illusions explores the art of trompe l'oeil in more than 100 European and American paintings ranging in date from the fifteenth through the twentieth centuries by such practitioners as Samuel van Hoogstraten, William M. Harnett, John Haberle, Jasper Johns and Roy Lichtenstein. Organised thematically, the volume begins with works of art inspired by ancient prototypes and with paintings by early Renaissance artists whose close observation of nature was a prerequisite for eye-deceiving illusionism. It then presents the principal subjects of trompe l'oeil artists, beginning with images of letters, prints, dollar bills, and other essentially flat objects that appear to rest on the picture surface, and then moves to three-dimensional illusions in which objects appear to project or recede from the picture plane, blurring the boundary between real and fictitious space. Finally, the volume illustrates the legacy of the art of trompe l'oeil for twentieth-century artists.
Five essays by experts in European and American art and in the science of seeing examine the phenomenon and persistence of trompe l'oeil over the centuries.