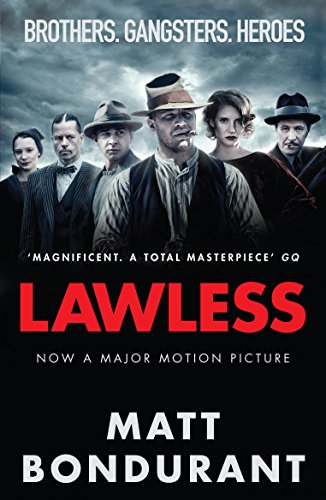 The Bondurant Boys were notorious gangster brothers who ran liquor though Franklin County during Prohibition. LAWLESS is their story. Based on the true account of Matt Bondurant's grandfather and two granduncles, this is a gripping tale of bootlegging, brotherhood and revenge.

'There is blood. There is whiskey. There is the scent of gunpowder and gasoline hanging above the space through which the Bondurants pass, unrepentant, robed in their own greed. It's a dark, flinty reimagination of what a memoir - and your grandfather's stories - can be' -- Esquire

Thick with the kind of blood-soaked descriptions that would do Cormac McCarthy proud. --Wall Street Journal

Thick with the kind of blood-soaked descriptions that would do Cormac McCarthy proud. --Wall Street Journal

Matt Bondurant's novel The Wettest County in the World (Scribner 2008) was a New York Times Editor's Pick, and San Francisco Chronicle Best 50 Books of the Year. A former John Gardner Fellow in Fiction at Bread Loaf, Kingsbury Fellow at Florida State, and Walter E. Dakin Fellow at Sewanee, Matt's short fiction has been published in journals such as Prairie Schooner, The New England Review, and Glimmer Train, and he has recently held residencies at Yaddo and the MacDowell Colony. He currently lives in Texas.

Lawless : Originally Published With the Title 'the Wettest County in the World'

Descrizione libro Paperback. Condizione: new. Paperback. White mule, white lightning, firewater, popskull, wild cat, stump whiskey, or rotgut - whatever you called it, Franklin County was awash in moonshine in the 1920s. During Prohibition, the Bondurant Boys were moonshiners and notorious roughnecks who ran liquor though Franklin County, Virginia. Lawless is their story, a white-knuckle fable of bootlegging, revenge and remorse. Forrest, the eldest brother, is fierce, mythically indestructible, and the consummate businessman; Howard, the middle brother, is an ox of a man besieged by the horrors he witnessed in the Great War; and Jack, the youngest, has a taste for luxury and a dream to get out of Franklin. Driven and haunted, these men forge a business, fall in love, and struggle to stay afloat as they watch the world they know crumble around them. In vivid, muscular prose, Matt Bondurant brings these men - their dark deeds, their long silences and their deep desires - to thrilling life. Now a major motion picture starring Tom Hardy, Shia LaBeouf, Gary Oldman, Mia Wasikowska, Guy Pearce and Jessica Chastain Shipping may be from multiple locations in the US or from the UK, depending on stock availability. Codice articolo 9780857867285

Lawless: Originally published with the title 'The Wettest County in the World'

Lawless : Originally Published With the Title 'the Wettest County in the World'