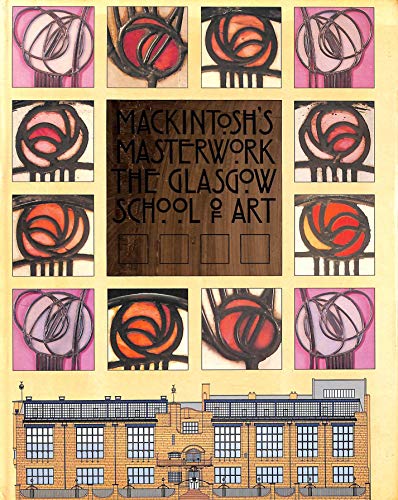 The Glasgow School of Art is recognised internationally as a seminal building linking the last decade of the nineteenth century with the entire twentieth century. The School's renown is synonymous with the reputation of its young designer, Charles Rennie Mackintosh, who has now become the most celebrated British architect in Europe since a fellow Scot, Robert Adam.
On its original publication in 1989, this book was the first full-scale study devoted specifically to the masterwork of Mackintosh, The Glasgow School of Art. Compiled exclusively by members of the School staff, it attempts to answer some of the questions any informed visitor might ask. What was Mackintosh's professional education? What are the sources of his complex symbolism? What were the financial details? Was the client satisfied with the final result?
Now in paperback for the first time, Mackintosh's Masterwork includes a contribution by Professor Andrew MacMillan on the significance of the School as a piece of architecture and a discussion of its place in the development of architecture; an account of its difficult construction, and a survey of the arts and crafts in Glasgow, by William Buchanan; a survey of the architecture of Glasgow and Scotland by Dr James Macaulay; a description by Peter Trowles of Mackintosh's furniture for the School using measured drawings, some of Mackintosh's own drawings, and contemporary photographs of the furniture in situ. The book also includes 200 photographs in colour and black and white, a series of computer-generated projections of the building, and a detailed Bibliography by George Rawson.
The above elements combine to set the background from which Mackintosh emerged, and to make this publication an invaluable sourcebook to a great building which is both a landmark in one of the several directions architecture was later to take and one of the most stimulating places in which young creative artists work.

Descrizione libro Richard Drew Publishing, 1989. Hardcover. Condizione: Used; Good. **Simply Brit** Shipped with Premium postal service within 24 hours from the UK with impressive delivery time. We have dispatched from our book depository; items of good condition to over ten million satisfied customers worldwide. We are committed to providing you with reliable and efficient service at all times. Codice articolo 1726368

Descrizione libro Richard Drew Publishing, 1989. Hardcover. Condizione: Used; Good. **SHIPPED FROM UK** We believe you will be completely satisfied with our quick and reliable service. All orders are dispatched as swiftly as possible! Buy with confidence! Aloysius Ihezie. Codice articolo mon0002230205

Descrizione libro Richard Drew Publishing, 1989. Hardcover. Condizione: Used; Good. Ex Library Copy **SHIPPED FROM UK** We believe you will be completely satisfied with our quick and reliable service. All orders are dispatched as swiftly as possible! Buy with confidence! Aloysius Ihezie. Codice articolo 3723245

Descrizione libro Hardback. Condizione: Good. The book has been read but remains in clean condition. All pages are intact and the cover is intact. Some minor wear to the spine. Codice articolo GOR001973863

Descrizione libro Hardback. Condizione: Fair. A readable copy of the book which may include some defects such as highlighting and notes. Cover and pages may be creased and show discolouration. Codice articolo GOR003196872

Descrizione libro Richard Drew Publishing, 1989. Hardcover. Condizione: Very Good. WE ARE PROCESSING ORDERS AS NORMAL DURING THIS VIRUS EPIDEMIC, ALL ITEMS ARE SENT BY ROYAL MAIL. DISPATCHED FROM THE UK WITHIN 24 HOURS ( BOOKS ORDERED OVER THE WEEKEND DISPATCHED ON MONDAY) BY ROYAL MAIL. ALL OVERSEAS ORDERS SENT BY AIR MAIL. WE ALSO ACCEPT PAYMENT IN US DOLLARS OR EURO BY BANK TRANSFER. Codice articolo mon0000721723