Articoli correlati a Reinventing Collapse: The Soviet Experience and American... 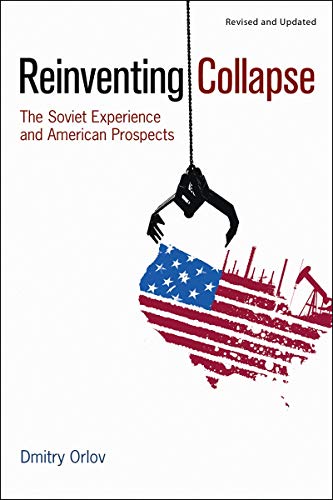 The United States is in steep decline. Plagued by runaway debt, a shrinking economy, and environmental catastrophes to rival Chernobyl, the United States has been retracing the trajectory of the Soviet Union in the early 1980s toward national bankruptcy and political dissolution. By comparing a collapse that has run its course to one that is now unfolding, Dmitry Orlov holds a unique lens up to America's present and future.

As Orlov's predictions continue to come true, his writing continues to gain mainstream acceptance. This revised and updated edition of Reinventing Collapse examines the circumstances of the demise of the Soviet superpower and offers clear insights into how we might prepare for the events that are unfolding here.

Orlov gives no quarter to prophets of doom and gloom, finding plenty of room for optimism, if only we focus our efforts on personal and cultural transformation instead of trying to perpetuate an impossible status quo. This challenging yet inspiring and surprisingly upbeat work is a must-read for anyone concerned about peak oil, the environment, geopolitics, international relations, and life in a resource-constrained world.

Dmitry Orlov is an American engineer who was an eyewitness to the Soviet collapse and has written extensively on the subject of the impending collapse of the United States.

...Reinventing Collapse< examines the circumstances of the demise of the Soviet superpower and offers clear insights into how we might prepare for coming events. This challenging yet inspiring work is a must-read for anyone concerned about energy, geopolitics, international relations, and life in a post-Peak Oil world.―The A Word

Dmitry Orlov was born and raised in Leningrad, USSR and immigrated to the United States in the mid-seventies. He was an eyewitness to the Soviet collapse over several extended visits to his Russian homeland between the late eighties and mid-nineties. Dmitry is an engineer who has contributed to fields as diverse as high-energy Physics and Internet security. Starting in 2005, he has written extensively on the subject of the approaching collapse of the United States, and the many similarities and differences between the post-American and the post-Soviet experience. Dmitry sees his mission as a public service: in his numerous articles, presentations and interviews he has argued that collapse of the US, although inevitable, is survivable, given the right attitude and some timely preparation.