Articoli correlati a Robert Louis Stevenson's Kidnapped or the Lad With...

Robert Louis Stevenson's Kidnapped or the Lad With the Silver Button: The Original Text 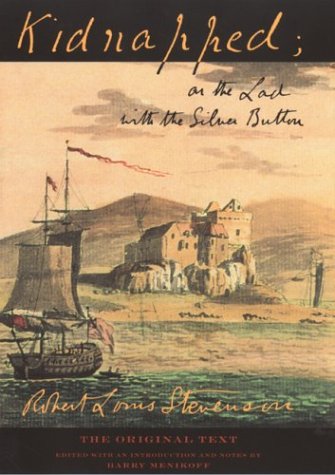 Robert Louis Stevenson always considered Kidnapped, the tale of 17-year-old David Balfour's adventures in the remote islands and highlands of Scotland with renegade soldier Alan Breck Stewart, to be his greatest novel, but when the classic adventure tale was published in 1886, it was without much of what its author held dear. His English publisher had excised many of the Scottish words and phrases he had used to evoke the suspense of the novel. From simple misreadings to deliberate revisions, subsequent printed editions represented major departures from Stevenson's handwritten text.

Drawing on the unique autograph manuscript in the Huntington Library, Professor Barry Menikoff has faithfully reproduced the text as Stevenson originally wrote it, restoring the author's language and punctuation, as well as the authentic Scots quality of his diction.

This handsome new edition of a novel, whose avowed purpose was the recovery of an important part of Scots history, reproduces for the first time the original drawings that accompanied the text during its serialization inYoung Folks. Menikoff's substantial introduction situates the book in its cultural context and enables us to see why Stevenson's contemporaries were both entranced and awed by his achievement. In his extensive notes to the novel, he reveals Stevenson's enormous prestige as an authority on language, both English and Scots, for Kidnapped was widely drawn upon as a reference by lexicographers for theOxford English Dictionary and the Scottish National Dictionary. Finally, for a tale that charts the "wanderings" of David Balfour over the land and seas of Scotland, this edition is the first to provide a gazetteer of place-names encountered during the course of those travels.

Barry Menikoff is professor of English and American literature at the University of Hawaii and one of the world's leading authorities on Robert Louis Stevenson. He has previously publishedRobert Louis Stevenson and "The Beach of Falesa" and a collection of Stevenson's shorter fiction,Tales from the Prince of Storytellers.

1. Kidnapped; or, The Lad with the Silver Button

2. Kidnapped; or, The Lad with the Silver Button

3. Kidnapped; or, The Lad with the Silver Button

4. Kidnapped: The Original Text: or the Lad with the Silver Button

Descrizione libro University of California Press, 1999. Hardcover. Condizione: New. 1st. A lovely hardback volume with the original text. New - still in cellophane wrap (although this has been torn in places). This book is in stock now, in our UK premises. Photos of most of our books are available - please ask, as dustjacket and cover illustrations vary, and unless the accompanying image is marked 'Bookseller Image', it is an Abebooks Stock Image, NOT our own. Overseas buyers also note that shipping rates apply to packets of 750g and under, and should the packed weight of an item exceed this we reserve the right to ship via 'Economy', or request extra postage prior to fulfilling the order, or cancel. Codice articolo mon0000096537

5. Kidnapped; or, The Lad with the Silver Button [Hardcover] Stevenson, Robert Louis and Menikoff, Barry