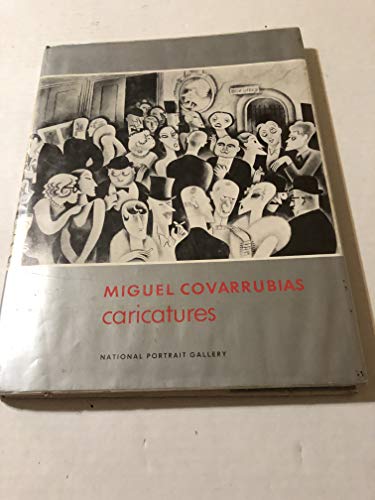 Briefly traces the life of the Mexican-born artist and anthropologist, and gathers his caricatures of famous actors, writers, and critics of the twenties and thirties

Descrizione libro Condizione: Very Good. Condizione sovraccoperta: Very Good. Washington, D.C.: National Portrait Gallery, 1985. First Edition. Quarto (29x22x1.5cm); 164pp with chronology, bibliography, and index. Color and black and white illustrations throughout. Caricature of theater-lobby throng on dust jacket cover against metallicized silver ground. Volume in off-white cloth, with black stamping on spine and front panel. Jacket bumped at corners and spine ends, with a few shallow tears along edges, a paper-clip impression at top center, and some general scuffs and smudges to surface. Boards are sturdy and square with corresponding bumps at spine ends. Binding is sound and pages unmarked. Covarrubias (1904-1957)-Mexican painter, illustrator, caricaturist, art historian, and, remarkably, co-discoverer of the Olmec culture-poked at the American social scene in the 20s, 30s, and 40s, often by depicting social and intellectual VIPs in pairs, called "Impossible Interviews." His most famous image is probably that of Freud and Jean Harlow interacting. Or, rather, not. He certainly knew how to Olmecize the glitterati in his stylized caricatures, increasing the gayety of the world for readers of Vanity Fair and the New Yorker. This volume is the catalog of the retrospective of his work at the Smithsonian's National Portrait Gallery 16 November 1984 to 13 January 1985. Codice articolo 12294

Descrizione libro Hardcover. Condizione: Fine. Condizione sovraccoperta: Very Good. PHOTOS (illustratore). FIRST. PUBLISHED IN CONJUNCTION WITH AN EXHIBIT HELD AT THE NATIONAL PORTRAIT GALLERY FROM 11/16/84 TO 1/13/85 A VERY RARE TITLE BOOK IS TRULY FINE SOLID CLEAN AND BRIGHT UNMARKED WITH A CLEAN WHITE COVER JACKET IS CLEAN AND BRIGHT WITH SOME SHELFWARE TO BACK A GREAT COPY. Codice articolo 006240

Descrizione libro Hard Cover. Condizione: Very Good. Condizione sovraccoperta: Very Good. This is a very good hardcover copy in a very good dust jacket with just light wear to the edges of the jacket, and a small chip at the top of the spine. Completely clean inside and out. This catalog was prepared to accompany the exhibition at the National Portrait Gallery from November 1984 to January 1985. Reminiscence of Covarrubias by Al Hirschfeld. Essay by Bernard F. Reilly, Jr. Chronolgy. Lists of Illustrations and Writings Published in the United States. Bibliography. Illustrated in color and black & white. 11" high X 9" wide, 163 pages. This book will be securely wrapped and packed in a sturdy box and shipped with tracking. Codice articolo 013117