Articoli correlati a John Locke and Medicine: A New Key to Locke

John Locke and Medicine: A New Key to Locke 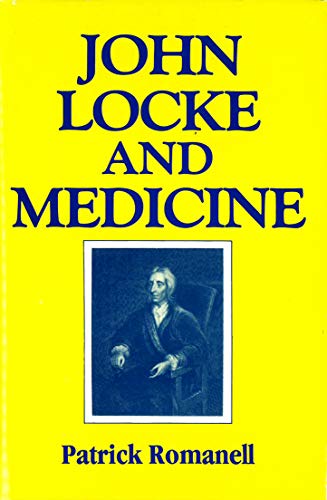 The philosophical thought of John Locke, a physician by profession, was colored by Locke's medical outlook to a much greater degree than had ever been suspected. Patrick Romanell, in John Locke and Medicine, examines Locke's relatively unknown medical writings and asks how Locke's own distinctive conception of human knowledge, traditionally classified under British empiricism, developed. He finds that, of all of Locke's interests, it is medicine that accounts most directly and effectively for his practical ideal of life and for his constant appeal to "profitable knowledge."

In his masterpiece An Essay Concerning Human Understanding (1690), Locke attempted, as he stated it, "to describe to others, more particularly than had been done before, what it is their minds do, when they perform that action, which they call knowing." Locke was intent on describing "the natural history of knowledge" and he required an appropriate method of inquiry. Romanell shows that it was Locke's medical thought and his background as a physician that provided the paradigm for his famed "historical, plain method" of inquiry that he applied to his philosophical analysis of human understanding.

In addition to the light this sheds on Locke's philosophy, this new information causes us to reconsider several other significant issues: the nature of the debate between the competing schools of Continental Rationalism and British Empiricism; the position of Sydenham the physician in Locke's intellectual development; and the subtle differences of temper within the long tradtition of British Empiricism itself.

John Locke and Medicine is the first book to discuss the hitherto neglected relationship between Locke the phycisian and Locke the philosopher. A major contribution to the study of John Locke, it is also a fascinating account of one of the many instances of the meeting of medicine and philosophy in the history of ideas.

Patrick Romanell was H.Y. Benedict Professor of Philosophy at the University of Texas, El Paso.

1. John Locke and Medicine: A New Key to Locke

2. John Locke and Medicine: A New Key to Locke