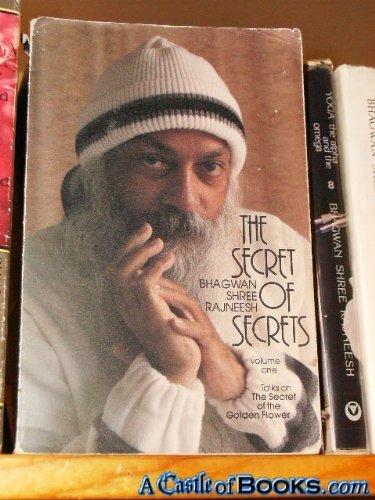 The secret of secrets. Volume one

THE SECRET OF SECRETS, VOLUME ONE: Talks on The Secret of the Golden Flower

Secret of Secrets, Volume One: Talks on "The Secret of the Golden Flower"

Descrizione libro Paperback. First Edition [1982], so stated. Very Good in Wraps with DJ: The shows indications of careful use: slight spine lean and the backstrip is very slightly concave and there are dampstains at the backstrip and along the hinges; former owner's name and date at the front endpaper; the binding remains secure; the text is clean. The DJ shows mild rubbing overall and light wear to the extremities; several short, closed tears along the top edge have been reinforced with cellophane tape; unclipped. Shows some light wear and a few flaws, but remains structurally sound and tightly bound: clean, sturdy, presentable. NOT a Remainder, Book-Club, or Ex-Library. 8vo. 553 pages. Edited, with an Introduction by Ma Sagarpriya. Trade Paperback. Chandra Mohan Jain (1931 1990), also known as Acharya Rajneesh from the 1960s onwards, as Bhagwan Shree Rajneesh during the 1970s and 1980s, and as Osho from 1989, was an Indian mystic, guru and spiritual teacher. His international following has continued after his death. A professor of philosophy, he traveled throughout India during the 1960s as a public speaker. His outspoken criticism of politicians and the political mind, Mahatma Gandhi and institutionalised religion made him controversial. He advocated a more open attitude towards sexuality. In 1970 Rajneesh settled for a time in Bombay, initiating disciples (known as neo-sannyasins) and assuming the role of spiritual teacher. In his discourses he gave his original analysis and views on the writings of religious traditions, mystics and philosophers from around the world. His intelligent discourse and charisma attracted a growing number of Westerners. He moved to Pune in 1974, and established an ashram, where more transformational tools could be offered to the visitors. The ashram offered various original meditations that he developed for the modern man, many accompanied by original music productions as well. In addition, therapies derived from ancient and modern traditions including the Human Potential Movement were offered in the ashram to function as a cleansing before beginning meditation. A few permissive group therapies and some non-mainstream lectures, were seized upon by the media for their counter-culture qualities and sensationalized in India and abroad. By the late 1970s, tensions were mounting with the Indian government and the surrounding society. In mid-1981, Rajneesh relocated to the United States, where his followers established an "intentional community" known as Rajneeshpuram near Antelope, Oregon south of The Dalles, Oregon. Almost immediately, the commune's leadership became embroiled in conflicts with local residents (primarily over land use), which were marked by hostility on both sides. The large number of Rolls-Royce cars purchased for Rajneesh's use by his followers also attracted criticism. The Oregon commune collapsed in 1985 when Rajneesh revealed that the commune leadership had committed a number of serious crimes, including a bioterror attack (food contamination) on the citizens of The Dalles. He was arrested shortly afterwards, and charged with immigration violations. Rajneesh was deported from the United States in accordance with a plea bargain. Twenty-one countries denied him entry, causing Rajneesh to travel the world before returning to Pune, where he died in 1990. Rajneesh's ashram in Pune is today known as the Osho International Meditation Resort. His syncretic teachings emphasise the importance of meditation, awareness, love, celebration, courage, creativity and humour: qualities which he viewed as suppressed by adherence to static belief systems, religious tradition and socialisation. Rajneesh's teachings have had a notable influence on Western spirituality, as well as New Age thought. Their popularity has continued to grow since his death. Codice articolo 44598