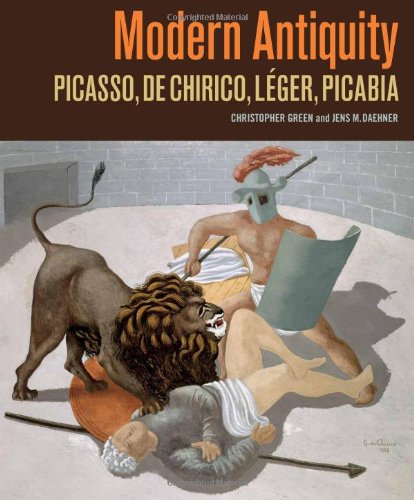 An unlikely episode in the history of European Modernism is the alliance between the avant-garde and the antique forged by artists of impeccable radical credentials. This book focuses on the reinventions and transformations of antiquity in the work of four culturally and politically diverse artists between 1905 and 1935. In distinctly different ways, classicizing creations such as de Chirico’s enigmatic piazzas, Picasso’s post-Cubist women, Léger’s mechanized nudes, and Picabia’s Transparencies reflect what the eyes and minds of these artists found so arresting in the arts of antiquity and how they made those arts modern.

Classicism in the modern age has often been condemned as a conservative regression of the avant-garde in light of the totalitarian regimes that formed in Europe during this period. Yet far from being a reactionary language, the “classical” provided a range of elements that were surprisingly in tune with the “modern.” Modern Antiquity draws unprecedented attention not only to the aesthetic impact ancient art had on twentieth-century artists but also to the ways in which these artists shaped our contemporary experience of antiquity. The result is a new and more nuanced appreciation of the complex role the classical past has played in western modernity.

Christopher Green is professor emeritus of art history at the Courtauld Institute of Art in London and author of Picasso: Architecture and Vertigo (Yale University Press, 2005). Jens M. Daehner is associate curator in the Department of Antiquities at the J. Paul Getty Museum and coauthor of The Herculaneum Women: History, Context, Identities (Getty Publications, 2008).