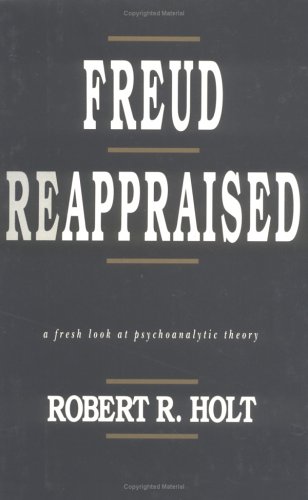 Freud Reappraised is a comprehensive and authoritative critique of the fundamental theory of psychoanalysis. It is the first appraisal to consider the humanistic and philosophical as well as the biological, psychological, and medical aspects and antecedents of psychoanalytic theory. With the eye of a concerned friend rather than an attacker or defender, Robert B. Holt, an internationally recognized Freud scholar, presents an erudite analysis of the ills of psychoanalysis. The volume serves as a guide to the reading of Freud and offers a new depth of understanding of the many influences that affected Freud's thought and work.
The volume opens with an historical overview that examines the meanings of the basic theory of psychoanalysis (which Freud called metapsychology), its relation to clinical theory, its development and personal significance to Freud. Dr. Holt also discusses Freud's cognitive style, showing how Freud's unique modes of thinking and writing can easily lend themselves to misinterpretation of his essential message.
Three sections, which constitute the bulk the work, respectively take up the economic, dynamic, and structural perspectives that comprise metapsychology. Each section presents the origins and intellectual history of the major concepts and describes how Freud came to adopt them. Every segment of theory is examined for its underlying philosophical assumptions, its internal consistency, how well it squares with relevant facts, and how tenable it is by the canons of scientific methodology. Because Freud never ceased amending the theory while he lived, the approach takes into consideration the ways in which the theory developed. The book closes with assessments of psychoanalytic theory, discussion of major developments since Freud's death, and an appraisal of the prospects for its reform and reinvigoration.
More comprehensive than other works on Freud's attempts to construct a scientific theory and more systematic in its consideration of all aspects of metapsychology, this book will be required reading for all serious students of psychoanalytic theory. Beginning students will find that it explains and clarifies most of what is mystifying or difficult to understand in psychoanalysis, while the most advanced scholars will have to take a position on it. Clinicians who use psychoanalytic theory to any extent will profit from its guidance in holding fast to the parts of Freud's work that have proved lastingly valuable while revising or discarding what is fallacious, anachronistic, or otherwise flawed. Those who are drawn to intellectual history, teachers of psychology and the other disciplines that have been impacted by psychoanalysis, and anyone who has been interested in Freud's ideas while having doubts, confusion, or misgivings about the theory will find the book valuable.

Robert R. Holt is Professor of Psychology Emeritus, New York University. Educated at Princeton and Harvard, he had psychoanalytic training in Washington and Topeka. He was formerly Director of the Psychological Staff, Menninger Foundation; Director of the Research Center for Mental Health, NYU; and most recently, Founding Director of NYU's Program in Peace Global Policy Studies. For 31 years, his work was supported by a Research Career Award from the National Institute of Mental Health. His publications include 10 other books and over 100 technical papers. His contributions have been honored by awards form several scientific and professional societies, and he received NYU's Great Teacher Award in 1985.

Part I. Introductory Material. A Personal Introduction. The Manifest and Latent Meanings of Metapsychology. Freud's Cognitive Style. Part II. Psychic Energy: The Economic Point Of View. A Critical Examination of Freud's Concept of Bound versus Free Cathexis. A Review of Some of Freud's Biological Assumptions and their Influence on his Theories. Beyond Vitalism and Mechanism: Freud's Concept of Psychic Energy. Part III. Instinct Theory: The Dynamic Point Of View. Drive or Wish?: A Reconsideration of the Psychoanalytic Theory of Motivation. Part IV. Ego Psychology And The Theory Of Thinking: The Structural Point Of View. The Past and Future of Ego Psychology. Ego Autonomy and the Problem of Human Freedom. The Development of the Primary Process: A Structural View. The Present Status of Freud's Theory of the Primary Process. Part V. Critical Reflections On Psychoanalytic Theory As A Whole. The Death and Transfiguration of Metapsychology. The Current State of Psychoanalytic Theory. Part VI. Toward The Future Freud and the Emergence of a New World Hypothesis.