Principles of Egyptian Art: Heinrich Schafer: Edited by Emma Brunner-Traut, Translated and Edited by John Baines with a Foreword by E.H. Gombrich: Volume 0 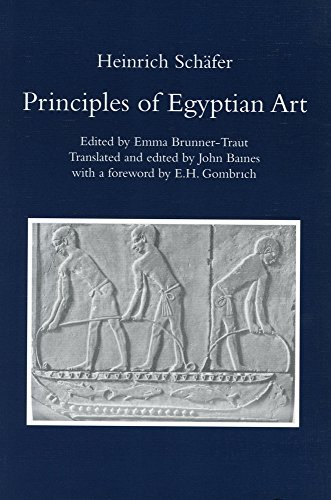 This classic work discusses represenations in Egyptian painting, sculpture and reliefs, assessing how objects and figures are represented in two dimensions, introducing the ideas of 'perceptual' and 'conceptual' art. Translated from the German by John Baines who has revised the text and illustrations to take account of recent research.

5. Principles of Egyptian Art: Edited by Emma Brunner-Traut, Translated and Edited by John Baines with a Foreword by E.H. Gombrich (Paperback)

Descrizione libro Griffith Institute, United Kingdom, 2002. Paperback. Condizione: New. Repr W/Revision. Language: English. Brand new Book. This classic book, first published in 1919, is one of the most important works of Egyptology, and is of great significance to art historians, aestheticians, and psychologists working in related fields. In the ground-breaking study Heinrich Schafer set out to analyse and elucidate the representational conventions of Egyptian two-dimensional art, and to explain how they differ from Western conventions that have perspective at their core. He showed that Egyptian representation is based more on mental processing than on direct perception, and that the aim of Egyptian artists was to depict an object as it really is, rather than as it appears to be. Egyptian approaches to representing space were also conditioned by this aim. The author extended this fundamental insight to cover almost all apparent anomalies in the Egyptian rendering of nature. His conclusions can be compared with analyses by psychologists that are based on the very different area study of children's drawings. The observations of Schafer and other art historians, and those of psychologists, have led to a characterization of polar tendencies in pictorial representation that might be termed 'conceptual' and 'perceptual'. Schafer extended his conclusions, which were based on painting and relief, to encompass statuary, as well as providing a concluding synthesis. The present book, based on the fourth German edition of 1963, edited after the author's death by Emma Brunner-Traut, was first published in 1974. In the course of translating it, John Baines, who is Professor of Egyptology in the University of Oxford, revised the text and illustrations to take account of recent research. This reprint incorporates numerous additions and some corrections, keeping the book abreast of work in the field. Codice articolo BZV9780900416514