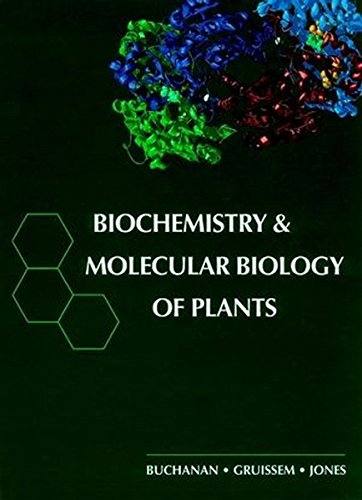 Biochemistry & Molecular Biology of Plants is a major contribution to the plant sciences literature, superbly edited by three distinguished scientists, Bob B. Buchanan, Wilhelm Gruissem, and Russell L. Jones, with contributions from more than 50 world-renowned scientists. With over 1,400 pages, 1,100 full-colour original drawings and 500 photographs this work qualifies, in the words of the Science reviewer, as:

"an essential reference for practicing plant biologists and for the increasing number of scientists from other disciplines who are entering the field of plant biology. To exploit fully the wealth of new information provided by the genome projects and to integrate the metabolic, regulatory, and signal transduction pathways of complex organisms, biologists will require a solid command of biochemistry and physiology. For this reason, the publication of Biochemistry Molecular Biology of Plants could not have come at a more opportune and auspicious time."

This book is meticulously organised and richly illustrated, useful both for teaching and for reference. The multi-authored work provides a contemporary view of its subject, including molecular biology, cell biology, and plant physiology, integrated around the themes of:

Read the words of the reviewer in CELL:
"The great strength of this book is that it has integrated its three major components (molecular biology, cell biology, and plant biochemistry) in each of the 24 chapters, resulting in a comprehensive analysis of a multitude of specific topics."

Images are available directly from the ASPB web site at http://www.aspb.org/publications/biotext/

A native Virginian, Bob B. Buchanan obtained his Ph.D. in microbiology at Duke University and did postdoctoral research at the University of California at Berkeley. In 1963, he joined the Berkeley faculty and is currently a professor in the Department of Plant and Microbial Biology. He has taught general biology and biochemistry to undergraduate students and graduate-level courses in plant biochemistry and photosynthesis. Initially focused on pathways and regulatory mechanisms in photosynthesis, his research has more recently dealt with the regulation of seed germination. This latter work is finding application in several areas.

Bob Buchanan has served as department chair at UC-Berkeley and was president of the American Society of Plant Physiologists from 1995 to 1996. A former Guggenheim Fellow, he is a member of the National Academy of Sciences and a fellow of the American Academy of Arts and Sciences and the American Association for the Advancement of Science. His other honors include the Bessenyei Medal from the Hungarian Ministry of Education, the Kettering Award for Excellence in Photosynthesis from the American Society of Plant Physiologists, and the Distinguished Achievement Award from his undergraduate alma mater, Emory and Henry College.

Wilhelm Gruissem was born in Germany, where he studied biology and chemistry and obtained his Ph.D. from the University of Bonn. He did postdoctoral research at the University of Marburg and the University of Colorado at Boulder, and in 1983 joined the faculty of the University of California at Berkeley. He chaired the Department of Plant and Microbial Biology at UC-Berkeley from 1993 to 1998, and since 1998 has been director of a collaborative research program between the department and the Novartis Agricultural Discovery Institute in San Diego. In July 2000, he will join the Swiss Federal Institute of Technology in Zurich as professor of plant biotechnology. He has taught general biology and plant molecular biology to undergraduate and graduate students. His research focuses on pathways and molecules involved in plant growth control and regulation of chloroplast development.

Willi Gruissem is an elected fellow of the American Association for the Advancement of Science and a member of several learned societies. He serves on the editorial boards of several professional journals and has received a number of honors and awards for his research program.

Russell Jones was born in Wales and completed his B.Sc. and Ph.D. degrees at the University of Wales, Aberystwyth. He spent one year as a postdoctoral fellow at the Michigan State University-Department of Energy Plant Research Laboratory with Anton Lang before being appointed to the faculty of the Department of Botany at the University of California at Berkeley in 1966. He is now a professor of plant biology at UC-Berkeley, where he teaches undergraduate classes in general biology and graduate courses in plant physiology and cell biology. His research focuses on hormonal regulation in plants using the cereal aleurone as a model system, with approaches that exploit the techniques of biochemistry, biophysics, and cell and molecular biology.

Russell Jones was president of the American Society of Plant Physiologists from 1993 to 1994. He was a Guggenheim Fellow at the University of Nottingham in 1972, a Miller Professor at UC-Berkeley in 1976, a Humboldt Prize Winner at the University of Goettingen in 1986, and a RIKEN Eminent Scientist, RIKEN, Japan, in 1996.

Descrizione libro soft cover. Condizione: New. International Edition. No supplemental materials. International Editions may have a different cover or ISBN but generally have the exact same content as the US edition, just at a more affordable price. In some cases, end of chapter questions may vary slightly from the US edition. International Editions are typically printed in grayscale, and likely will not have any color throughout the book. New. Books ship from multiple locations depending on availability. All orders are shipped with tracking information. We take pride in our customer service. Please contact us if you have any questions regarding this listing. Codice articolo 14915