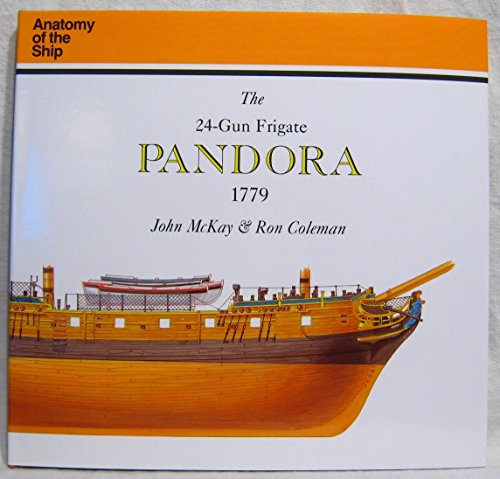 1. The 24-Gun Frigate Pandora (Anatomy of the Ship)

Descrizione libro Phoenix Publications, 1992. Hardcover. Condizione: Very Good. 1992 Phoenix Publications, Inc. (Cedarburg, Wisc.), oblong 10 x 9 inches tall light brown cloth hardbound in publisher's unclipped dust jacket, copiously illustrated with black-and-white line drawings and photographs, 128pp. A near fine copy - clean, bright and unmarked - apparently unread, with no detractions noted, in a like dust jacket which is nicely preserved and displayed in a clear archival Brodart sleeve. (Other copies, unless they indicate otherwise, DO NOT come in an archival Brodart sleeve.) Note that this is the 1992 Phoenix Publications imprint, NOT the inferior 2010 reprint. This is a heavy and oversized book, so additional postage will be required for international or priority orders. ~LLL~ In the introduction, the authors detail the design and building of the ship, hull construction, armament, steering, masts, rigging and other elements of the vessel. Over 300 perspective and three-view line drawings with in-depth descriptive keys and photos of virtually every detail of the ship. HMS Pandora was a 24-gun Porcupine-class sixth-rate post ship of the Royal Navy launched in May 1779. She is best known as the ship sent in 1790 to search for the Bounty and the mutineers who had taken her. She was wrecked on the return voyage in 1791. Codice articolo LLL-0902-11510

2. The 24-Gun Frigate Pandora (Anatomy of the Ship)

Descrizione libro Phoenix Publications, 1992. Condizione: Good. A+ Customer service! Satisfaction Guaranteed! Book is in Used-Good condition. Pages and cover are clean and intact. Used items may not include supplementary materials such as CDs or access codes. May show signs of minor shelf wear and contain limited notes and highlighting. Codice articolo 0961502193-2-4

3. The 24-Gun Frigate Pandora (Anatomy of the Ship)

4. The 24-Gun Frigate Pandora (Anatomy of the Ship)