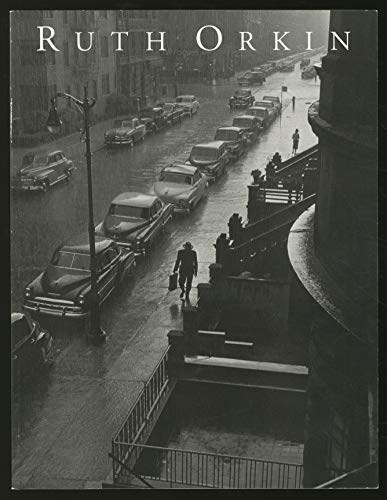 Descrizione libro Intl Center of Photography, New York, 1995. Softcover. Condizione: Near Fine. First Edition. 40pgs. Stiff pictorial wraps. Black and white photographs throughout. A touch of wear, otherwise as new. A retrospective of her work, from the exhibition at the International Center For Photography, May 5, 1995-July 16, 1995. "What characterizes Ruth Orkin's phootgraphy best is her ability to express compassion for and sympathy towards her subjects. Frequently they are accompanied by happy endings. Regardless of how they conclude, Orkin's photographs are always presented with dignity." Size: 8 1/2x 11". Codice articolo 028956

Descrizione libro New York City, NY: The Estate Of Ruth Orkin, 1995. Soft cover. Condizione: Fine. 1st Edition. 1st Printing. 40 pages. Published in 1995. Exhibition Catalog. One of the most elegantly produced catalogs on the photographic art of Ruth Orkin. The first and only edition. Published in a small and limited print run as a softcover original only. The First Edition is now rare. An austerely elegant production by Christine Zamora: Oversize-volume format. Pictorial softcovers with titles on the cover and spine, as issued. Photographs by Ruth Orkin. Biographical Notes by Miles Barth. Chronology appended at the end. Printed on pristine-white, thick coated stock paper by Meridian Printing Rhode Island in the United States to the highest standards. Without DJ, as issued. The book's design and presentation were adapted for the subsequent publication, "Ruth Orkin: Above And Beyond" (2000), pubIished five years later, making the two look like companion volumes even if they were not originally intended as such. Published on the occasion of the landmark posthumous exhibition of the same name held at the International Center of Photography (ICP) New York from May 5 through July 16, 1995. Presents "Ruth Orkin: A Retrospective". Some of the finest and most representative work of the humanist artist whose gritty yet tender street photographs are now regarded as an indispensable part of the canon. The retrospective is also notable for the inclusion of Orkin's much less-well-known "indoor" portraits of such celebrities as Alfred Hitchcock and Montgomery Clift on the studio set of "I Confess", a very young Woody Allen posing at The Met, and a very young Leonard Bernstein rehearsing an orchestra in New York City, among others. At her very best, Ruth Orkin is worthy of comparison with the most celebrated masters of street photography: Robert Frank, Helen Levitt, Garry Winogrand, and of course, her partner Morris Engel, whom she met during the filming of "Little Fugitive" (1952), one of the most influential films ever made. It was, as they say, a marriage made in heaven. Ruth Orkin died on January 16, 1985; Morris Engel, very recently, on March 6, 2005, and are, as it were, reunited at last. An absolute "must-have" title for Ruth Orkin collectors. This title is a contemporary art photography classic. This is one of few copies of the First Edition/First Printing still available online and is in especially fine condition: Clean, crisp, and bright, a pristine beauty. A rare copy thus. 36 plates. Ruth Orkin was named as one of "Ten Greatest Women Photographers of All Time", together with Dorothea Lange, Berenice Abbott, and Margaret Bourke-White. One of the greatest photographers of the 20th century. A fine copy. (SEE ALSO OTHER RUTH ORKIN TITLE IN OUR CATALOG) ISBN 0964624702. no. Codice articolo 21456